Spotlight: For the Love of a Sphynx by Heather Sharpe 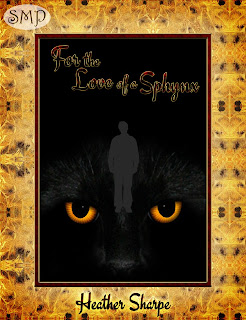 I had the pleasure of reading this book before its publication. It is cute, well written, fun, and tender. I'm pleased to host a spotlight for this today.

When time’s the enemy, there’s no room to pussyfoot around.

Blurb: Betrayed by her fiancé, Mahri Lassler swears never to risk losing her heart again. She’s convinced she may as well collect cats since she’s on the path to spinsterhood. She adopts a tomcat, and just as they’re beginning to learn each other’s idiosyncrasies, the cat bolts out the door, disappearing without a trace. Her quest to find the darn cat leads her to a confused, naked man writhing on the street. The hopeless look in his eyes touches something deep inside Mahri. Can she trust her heart enough to risk it on a man with no past? Will her love be enough to break his curse?

Bio: Heather Sharpe lives on six acres in Central Kansas with her husband, perfect baby boy, mother-in-law, and sister-in-law. In case the house isn’t full enough, it also includes four noisy dogs, one cat who inspired For the Love of a Sphynx and another who torments him, and a lizard. At night, all of them think they need room on the bed (except the lizard, thankfully). Up until the birth of her son, Heather taught elementary school. Now she chases around her toddler and writes whenever he naps.

Unimaginable agony ripped through him, searing every nerve, and igniting his blood. Contorting in pain, his muscles contracted independently, twisting his body into impossible positions.
What seemed an eternity later, he lay gasping in the dirt. He pulled his lips back in a  painful grimace as he sucked air into his aching lungs and looked around for Brigid. He would think twice before giving her an opportunity to hurt him that profoundly again. In all the battles he’d fought, he’d never felt such pain.
The clearing was empty. Brigid, the cottage, his horse, the small garden where they’d spent hours talking; all of it, had disappeared without a trace. A shiver of unease raced through his limbs.
The breeze, gentle now, ruffled his hair playfully. Testing his muscles tentatively, he noticed only a slight tenderness remained after the unbearable agony of before. His muscle and joint pain paled in comparison to a sudden thirst.
Climbing unsteadily to his feet, he stumbled to the brook. Whatever she’d done to him had messed with his vision. Everything seemed skewed. While trees and other still objects appeared fuzzy, anything that moved snapped with clarity, instantly claiming his undivided attention. A silver sheen blanketed the world before him. It dampened the saturation of the forest colors, but he noticed more small animals scurrying about than ever before.
Closing his eyes to offset the dizzying effects of this visual phenomenon, Morgan stretched toward the musical bubbling of water over stones and lapped several mouthfuls before daring to crack his eyes open. After the tortuous eternity and weird theatrics, he was unsure what he’d expected, but it definitely wasn’t this.
A furry black face with two short, pointed ears and feline eyes stared up at him from the surface of the water. What the hell?
Posted by Tara at 12:00 AM

Labels: Contemporary Romance, For the Love of a Sphynx, Heather Sharpe, paranormal, Spotlights