I wrote in my review of Karolina's Twins on this blog that I was just about burned out on the Holocaust.  Now I can say the same about WWII in general.  I've read way too much about WWII this year.  I admit that I was reluctant to accept author Jeannette Katzir's review request for Footprints in the Forest.  I accepted a free copy because I've never read about a real woman who was a WWII partisan.  This is a novel, but it's based on the life of the author's mother.  I wanted to see if there were significant differences between the fictional WWII Resistance heroines I'd read about, and one that actually existed. 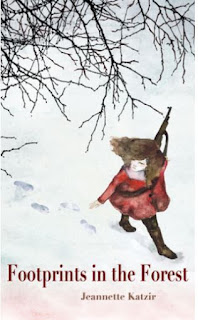 Like a number of popular books, Footprints in the Forest is a dual time frame novel.  It alternates WWII Poland with New York in the late 1940's.   I found the WWII chapters more interesting and compelling.  The American portions of the book were lighter in tone which some readers may consider a relief from reading about characters who are continually running for their lives.

In some ways, Chana the protagonist, reminded me of Jacqueline, the female French Resistance fighter in Marge Piercy's  Gone To Soldiers which I reviewed here.  They were both changed by their experiences, but I thought that Jacqueline became stronger and Chana emerged from WWII more fragile.   I understood why Chana  was so traumatized, but I preferred her fellow female partisan, Leeza who was more of a survivor type.   It was fortunate that Chana had Leeza's friendship because she certainly depended on Leeza for emotional support.  Chana also couldn't have survived without the steadiness of her brother, Isaac, who was always there for her.

Chana's developing art career in the U.S. was the aspect of the American narrative that I found most appealing.    I enjoyed reading about her creative process, how she learned to paint in oils and how her relationship with the gallery owner eventually evolved into a friendship.  On the other hand, I found Chana's stereotypical fantasy of the perfect wedding rather annoying.   It was also a very American idea of weddings, and it didn't seem likely to me that a Polish Jew from a religious background would have become so Americanized in her expectations that quickly.

There were a few names that I thought were inappropriate like the Russian partisan whose first name was Barry and the Polish Jew who had a brother named Thomas.  There was also a Hebrew error.  Alov ha'shalom  (may he rest in peace) is correct if the dead individual is male.  If the dead individual is female, it should be aleha  ha'shalom.  Yet these are minor problems.

The background otherwise seemed authentic and well-developed.   I felt that I was there in the forest with Chana trying to survive Nazis, severe weather and other dangers.  This was a gripping portrayal of the life story of Katzir's mother.