Some would say that we don't need another Arthurian novel.  I'm not one of those people.  I believe that the Matter of Britain, which is what the Arthurian myths are called by those who are centrally concerned with them, needs to get retold in every generation.   I'm also still holding out for my ideal Arthurian novel.  The Mists of Avalon wasn't it.  I was more interested in Marion Zimmer Bradley's portrayal of the relationship between Arthur and Lancelot than any of the women.  More recently there was Gwenhwyfar  by Mercedes Lackey.   That version of Guinevere as a warrior was a good deal closer to my ideal than anything else I'd seen.   She was almost what I was looking for.   I could see why Arthur (who was a warrior king) would feel a common bond with that Guinevere and would be impressed with her.   She was strong and capable. She also despised courtly intrigue as much as I do.  Yet I wanted a Guinevere who could be a convincing and authentic priestess as well as a warrior.   I thought that Daughter of Destiny by Nicole Evalina would give me the Guinevere that I was looking for.  I received a free copy from the author in return for this honest review. 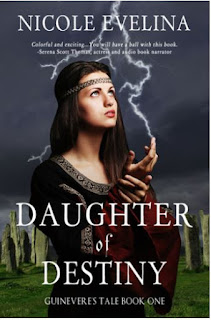 I was delighted that Guinevere was sent to Avalon to be trained as a priestess in this version.   Yet at eleven years old, she was clearly too young to appreciate the lessons she was learning or the importance of her psychic gift.  I can understand that she couldn't be an inspiring figure at that age, but I didn't expect her to manifest as the most hideous female adolescent trope in YA fiction.  This was a character limned with acid.  She was the Mean Girl incarnate-- obsessed with minor slights and plots of petty vengeance.   Instead of befriending the other priestesses in training, she was boiling over with envy of any girl who seemed to be powerful or favored by the senior priestesses.  Ugh!  I found her completely despicable.   She was the opposite of sympathetic for me.

Then tragedy struck and Guinevere seemed to be on the road toward maturation.  At a couple of points, I thought she was in danger of a Mean Girl relapse but that didn't seem to be happening.  It helped that she was faced with an adult version of the Mean Girl on a daily basis.  Guinevere definitely didn't aspire to be just like her. That's a good thing because the Queen of Britain should be building alliances rather than making new enemies.   Unfortunately, royal courts tend to be a seething cauldron of rivalries.   Can this Guinevere rise above all the spitefulness when she wears a crown?  I hope she can.   But the truth is that I didn't sign on for this sort of Guinevere.   I wanted her to be so much better than MZB's Guinevere in The Mists of Avalon, and so far I'm not certain she can measure up to my expectations.

I have to confess that I'm more interested in the future of  Isolde than I am in Guinevere.   She's no saint, but she's adventurous, resourceful and is generous towards those she considers friends.  I'm wondering about how someone as resilient and pragmatic as Isolde gets caught up in such a tragic story as the one she's credited with in Arthurian myth.  Well, since Evalina starts with the premise that Arthurian myth got it wrong, I'll be rooting for Isolde to overcome future adversity.