Avishi: The Warrior Queen With An Iron Leg-- Blog Tour and Review 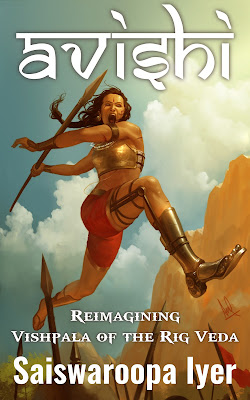 
Long before the times of Draupadi and Sita
Immortalised in the hymns of the Rig Veda
But largely forgotten to the memory of India
Is the Warrior Queen with an iron leg, Vishpala

Brought up in the pristine forest school of Naimisha, Avishi reaches the republic of Ashtagani in search of her destiny. When Khela, the oppressive King of the neighbouring Vrishabhavati begins to overwhelm and invade Ashtagani, Avishi rises to protect her settlement. But peril pursues her everywhere.
Separated from her love, her settlement broken, with a brutal injury needing amputation of her leg, can Avishi overcome Khela?

I'd like to add a new warrior queen to my favorites list alongside Boudica and Zenobia.   Avishi fought for her people against an empire building tyrant.  She is remembered in the Rig Veda as Vishpala who fought with a leg made of metal in ancient India before recorded history.   Avishi by Saiswaroopa Iyer tells her story, and the story of  Satya, the extraordinary healer whose dream was to create an artificial leg that would allow amputees to continue the lives they had before the amputation.  I received a free copy of this novel from b00k r3vi3w tours in return for this review.

Avishi  celebrates a forgotten milestone for the disabled, but it's also a plotted narrative with characters who experience internal and external conflict.   Avishi and Satya have a romantic relationship that is complicated by the fact that marriage is a recent innovation in their society.   Marriage is associated with monarchy. Monarchy is represented in this novel by the invader, Khela who seeks to conquer the democratic settlement  of Ashtagani.  Ashtagani is the home of Avishi and Satya.

So the institution of marriage becomes bound up in the political struggle.  In our contemporary context questioning the value of marriage is a radical idea, but for these protagonists the acceptance of marriage is a very fundamental change.   There was no agreement about the purpose of marriage, how marriage should work or who would be ideal partners in a marriage.

I loved Avishi and Satya, and was moved by their story.  I was also fascinated by the themes raised in Avishi.  For readers who are interested, there is a bibliography of the author's sources which includes resources on prosthetics, marriage and democracy in ancient India.  Saiswaroopa Iyer deserves recognition as an emerging talent, and as a thorough researcher. 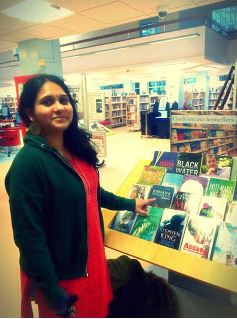 Saiswaroopa is an IITian and a former investment analyst turned author. Her keen interest in ancient Indian history, literature and culture made her take to writing. Her debut novel Abhaya, set in the times of Mahabharata was published in 2015. Avishi, her second novel set in Vedic India explores the legend of India’s first mentioned female warrior queen Vishpala.
She holds a certificate in Puranas from Oxford Centre for Hindu Studies. She is also trained in Carnatic Classical music and has won a state level gold medal from Tirumala Tirupati Devasthanams.