Cleopatra's Dagger: A Journalist in New York in 1880

I received a copy of Cleopatra's Dagger by Carole Lawrence from a publicist back in January.  Many apologies for the delay.  I got behind with my reviews this year.  With this review, I expect to be caught up. 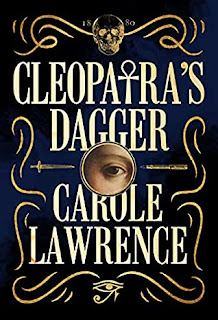 My reviews are based on voluminous notes from my book journal on every book I read.  So I very much related to what the protagonist, Elizabeth, had to say about her process. "The very act of putting her impressions down on paper helped her to understand what she thought and felt."

Elizabeth's editor warned her not to trust the police.  He told her about the Tompkins Square Park Riot of 1874 in which the police beat peaceful protestors with clubs.  I considered this indicative of the period and what it was like.  I am going to reproduce an illustration from the Wikipedia page devoted to this riot below.

Elizabeth's family seemed to be rather well off , belonging to the late 19th century equivalent of the aristocracy of New York. Her father was concerned that being a crime reporter was an improper occupation for his daughter.  I really liked Elizabeth's response.  "I'm not certain it's a proper occupation for anyone...[but] I am determined it will not be closed to women."

According to the blog Women's Views on News ,  the 1880 U.S. Census recorded 288 women journalists but that their stories were much like Elizabeth's assignment to report on Mrs. Astor's garden party in this novel.  Elizabeth's articles for The New York Herald on killings would have been very atypical for the period.  Yet my favorite real woman journalist, Nellie Bly, was also working during this period and she sure wasn't writing about garden parties.  See the section in the Wikipedia article on Nellie Bly about her career. I'm glad to see a fictional equivalent of Nellie Bly in this novel.

Elizabeth became a crime reporter when she discovered a body wrapped as a mummy on a walk, and insisted on covering the story. She convinced the detective in charge of the case that if the photo of the body was put on the front page of The New York Herald, they would find someone to identify the corpse more quickly.

When a second body was found in the East River, Elizabeth was summoned to the scene via telegram.  Detective Inspector Thomas Byrnes described her jewelry and how she was dressed.  Elizabeth said it sounded like this victim was dressed like the Egyptian water goddess, Anuket.  There was an ankh on a leather thong hanging on her neck.  I'm afraid I couldn't resist adding "Ankh if you love Anuket!" in my notes. One of the policemen who responded recognized this second victim as a prostitute named Mary Mullins.

When the mystery was resolved, it seemed anti-climactic to me. I gave the book a B.