Ambush: The Third in a Series About A Female Marine

Publicist Wiley Saichek gifted me with the mystery/thriller Ambush by Barbara Nickless via Amazon.  I had not read the previous two books in this series, but I read a Goodreads review that assured me that this book can stand alone.  It resolves a major ongoing issue in the female protagonist's life that relates to her military service in the Iraq War, and contains all the background necessary for understanding it.
I was interested in the fact that protagonist Sydney Rose Parnell is a Marine.  I'm pretty sure that I'd never previously read a novel about a female Marine.  I believed that she would definitely be a strong female protagonist.  I was also intrigued by Sydney going to Mexico to find an Iraqi child in this book. 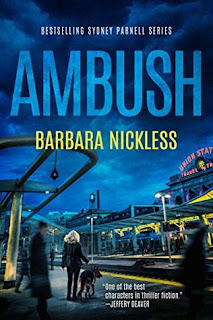 Regular readers of this blog will notice that the protagonist of the last book I read was also named Sydney.  This could be considered a coincidence, but it could also be possible that what was previously an unusual name for a woman is becoming more popular.
The first person perspective of Sydney Parnell is a very intimate one.  We are exposed to her doubts and fears, but she never hesitates to act quickly when it's called for.   Being a Marine calls for courage.  I have always believed that courage isn't really about never being afraid.  It's about overcoming those fears.  When I first started reading Ambush, I questioned the risks that Sydney took.  Yet over the course of the narrative, I recognized that she was smart, resourceful and very well trained.   I particularly liked her alternate version of the Marine by-word, Semper Gumby , which Sydney translated as "always flexible".   Flexibility allows for quick improvisation of a new plan when the old one isn't working.   It increases the odds of surviving dangerous situations.
Sydney is no longer in the Marines.  She is now a railroad detective.  Yet she has a K9 partner in her investigations who is military trained. His name is Clyde, and he is a very good dog. Sydney and Clyde work well together, and have a great bond of affection between them.  I enjoyed this aspect of the book.
Ambush isn't a romance, but there is a romantic relationship in this book that I considered emotionally intense.  I have loved some romance novels because they had great characters, but none have moved me to tears.  I cried when I read about a certain relationship in Ambush.  I found it heart rending.  This testifies to the power of Barbara Nickless' writing.  For me, this was a two handkerchief book when it came to the romance.
The case that began with a traumatic experience for Sydney that took place in Iraq was difficult to resolve, and involved a great many murders perpetrated in Iraq, Mexico and the U.S.  All the characters were well developed including the individual who was behind all the killings. I was impressed by the characterization, and thought that the resolution was satisfying.  I recommend  Ambush and its author to fans of mysteries and thrillers.
Posted by Shomeret at 12:00 AM No comments:

Book Summary
It is 1971. The fictional city of Bellport, Massachusetts, is in decline with an urban redevelopment project on the horizon expected to transform this dying factory town into a thriving economic center. This planned transformation has a profound effect on the residents who live in Bellport as their own personal transformations take place.
Sydney Stallworth steps away from her fellowship and law studies at an elite university to support husband Malachi’s dream of opening a business in the heart of the black community of his hometown, Bellport.
For Omar Bassari, an immigrant from Senegal, Bellport is where he will establish his drumming career and the launching pad from which he will spread African culture across the world, while trying to hold onto his marriage.
Della Tolliver has built a fragile sanctuary in Bellport for herself, boyfriend Kwamé Rodriguez, and daughter Jasmine, a troubled child prone to nightmares and outbursts.
Tensions rise as the demolition date moves closer, plans for gentrification are laid out, and the pace of suspicious fires picks up. The residents find themselves at odds with a political system manipulating their lives and question the future of their relationships. 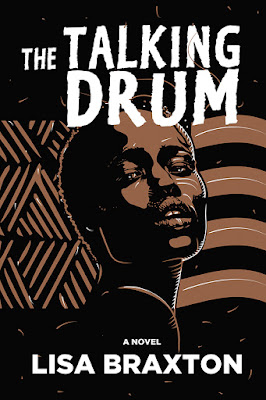 REVIEW
Publicist Laura Marie asked me to join this blog tour for The Talking Drum, the debut novel of Lisa Braxton.  I accepted the free review copy that she supplied because I was interested in the issues involving race, class, immigration and urban culture conflict that Braxton raises.
The summary may lead readers to believe that female protagonist Sydney Stallworth is a character who solely plays a support role to others.  It's true that she's supportive, but I thought she genuinely believed in her husband's business.  The potential of The Talking Drum to become a center for African American culture was important to her.  Yet she also  pursued her own goals as well by becoming a local journalist.  If it weren't for her dedication in following the protests of the African immigrants in Petite Africa against the "urban redevelopment" that would shatter their lives, the truth about the fires in that neighborhood might never have been discovered.  I admired Sydney.   Because she cared so deeply, I felt that she inspired everyone around her to follow their own dreams.
Della Tolliver  is an example of someone who clearly benefited from the presence of Sydney in her life, though Della would never have believed it at the outset.  When we first meet Della, she's a very unhappy woman.  I didn't like her very much at that point, but she improves her life over the course of the narrative with Sydney's help.
Just as in real life, there is no permanent victory against the forces of "urban re-development" in The Talking Drum.  Let us hope that there will always be those like Lisa Braxton who will lift up the voices of the marginalized communities that could be impacted before it's too late.
Lisa Braxton 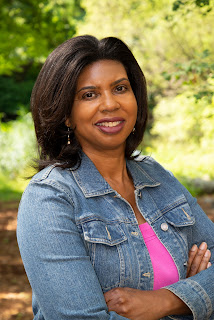 Lisa Braxton Bio
Lisa Braxton is an Emmy-nominated former television journalist, an essayist, short story writer, and novelist. She is a fellow of the Kimbilio Fiction Writers Program and was a finalist in the William Faulkner-William Wisdom Creative Writing Competition. She is the former president of the Boston Chapter of the Women’s National Book Association. Her stories and essays have been published in anthologies, magazines, and literary journals including Vermont Literary Review, Black Lives Have Always Mattered, Chicken Soup for the Soul, Northwestern University Magazine and The Book of Hope. She received Honorable Mention in Writer’s Digest magazine’s 84th and 86th annual writing contests in the inspirational essay category and was a finalist for the “Still I Rise” grant for Black Women Writers. She earned her Bachelor of Arts degree in mass media from Hampton University, her Master of Science degree in journalism from Northwestern University, and her Master of Fine Arts degree in creative writing from Southern New Hampshire University. She lives in the Boston, Massachusetts area.
Talking Drum Buy Links
Amazon.com
Indiebound
Barnes and Noble
Posted by Shomeret at 12:30 AM No comments: