The Paris Library: A Woman Librarian at the American Library of Paris During WWII

When a publisher sends me a book in paperback in addition to a digital copy from Net Galley, it's very clear to me that they really want my opinion.   Atria Books, which is a division of Simon & Schuster, did that to bring my attention to their book, The Paris Library.  I love libraries. There's also tremendous interest in this title, and it's set to release next month.  I decided that I needed to read and review it after I finished with the book I was currently reading at the time.

I mainly read the paperback because I prefer print.  I only read the Net Galley when I was  on public transit.  My Kindle is smaller and lighter than a trade paperback.  Yet I am traveling less during the pandemic than I once did.  So that was a small percentage read in digital format. I finished the book in four days. 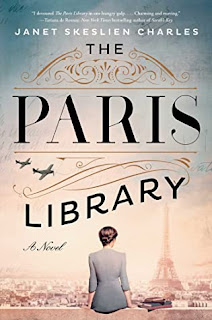 As the book opens Odile Suchet was preparing for an interview at the American Library of Paris (ALP).  Odile was qualified because she was a library student who knew English.  Though 1/4 of ALP's users were French at the time.

My feeling is that Odile made serious errors of judgement that hurt people during WWII.  She betrayed the trust of several people who were important to her.  I considered her an unlikable protagonist, but she tried to make amends by behaving graciously to the 1980's teen protagonist, Lily.

I was interested in ALP, but my negative feelings toward Odile lowered my estimation of The Paris Library as a whole.  Perhaps I would have liked a book from the perspective of the American director of ALP, Miss Reeder, much better.