The Light Over London: A WWII Novel of Romance, Secrets and Women's Autonomy

When a publicist pitches a book to me, the content of that pitch matters very much.   I want it to pique my interest, but I also want it to accurately reflect the book.  I should be made aware of what kind of book I'll be reading.  I try to do that in my blog review titles, so that the book will find its audience.

It seems to me that advance publicity for The Light Over London by Julia Kelly is trying to appeal to the sort of reader who is interested in the combat aspect of WWII.  There is an emphasis on the female historical protagonist joining an anti-aircraft unit and becoming a Gunner Girl.  The sort of reader who is interested in reading about Gunner Girls will expect that a high percentage of the book will contain action scenes or will at least take place in a military context. I requested this book for review on the strength of that publicity and received a copy from the publisher via Net Galley. 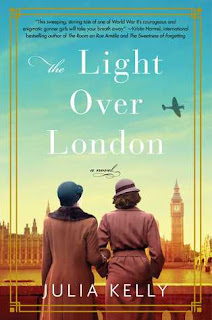 As I read Light Over London, I realized that I had to adjust my expectations.  It was a good book, just not the one that I thought it would be.   There was a combat sequence. There were also descriptions of training.  Julia Kelly captured the bonding between the women in the anti-aircraft unit very well. Yet I'd estimate that the Gunner Girl experience represented about 10% of the book.

I think that the other 90% was what the novel really focused on.   It was about the struggle of women to define themselves as individuals and live out their dreams.   It was also about how family, or the men in their lives supported or hindered them.   There were a number of  female characters in The Light Over London who were strong women.  They all went on to live the lives they chose for themselves.   There were no  relationships that involved a conventional romance genre HEA, but I think all these truly autonomous women found their own form of happiness.

There were a couple of major secrets.  One was a devastating scandal that infested the heart of a romantic relationship.   The other was a character building mistake that a family member made when she was young.   Both women moved on, and didn't allow themselves to be crushed by circumstances. I have to say that I was able to predict the nature of these secrets before they were revealed based on what I knew about the people involved.  So there were no surprises for me, but it was satisfying that I understood the characters so well.

I was glad to learn about the existence of Gunner Girls, and was delighted to find a novel like The Light Over London where all the major female characters were an inspiration.

Posted by Shomeret at 9:05 PM No comments: