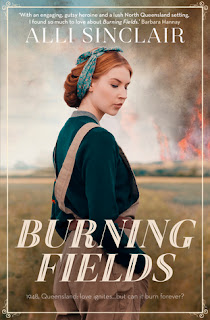 As the novel opens  in the post-WWII era, Australian Rosie Stanton has been living on her own in Brisbane and is accustomed to making her own decisions, but harassment at her job has forced her to return to the family farm.  I found her situation very relatable from the outset. Other American readers may have a similar reaction since the MeToo movement has increased awareness of workplace harassment.

Rosie brought useful skills to her family, but her father's traditionalism made him unreceptive. Sexist attitudes were pervasive during this period. Rosie had to fight for respect from her father and the surrounding community.

Some wonderful exceptions to the denigration of women were the hero, Tomas Conti, and his family who owned the farm next door to the Stantons.   As Italians, they were victims of prejudice mainly resulting from Italy having been an enemy during WWII. Yet Rosie's father had more personal reasons for his animus against Italians.  This anti-Italian bigotry was one of the obstacles in the path of HEA for Rosie and Tomas.

Tomas' grandmother, known as Nonna, was an unwavering source of support.  She became a friend and mentor for Rosie.  Nonna was both strong-minded and wise.   I loved Nonna's relationship with the often beleaguered female protagonist.

There were some lovely Italian customs mentioned during the narrative including giving women a mimosa flower on Festa de la Donna which is an Italian holiday celebrating women.  For more information, see this article from Italy Magazine  on the subject.

I thought that Burning Fields was a beautiful and moving romance.  Rosie's feminism and the foregrounding of post-WWII antagonism against immigrants from countries that had been Axis Powers may cause readers to think about these issues.

Posted by Shomeret at 2:11 PM No comments: