The Mozart Conspiracy by Susanne Dunlap is the sequel to a YA historical mystery that I really liked called The Musician's Daughter in which fictional fifteen year old violinist Theresa Schurman investigated her father's death in 18th century Vienna.   I wasn't aware that there was a sequel when The Mozart Conspiracy was originally published in 2010.  I only found out about it now because the new Kindle edition is available on Net Galley.  I snapped up the free digital review copy, and decided to read this mystery during Thanksgiving week because I felt thankful for it. 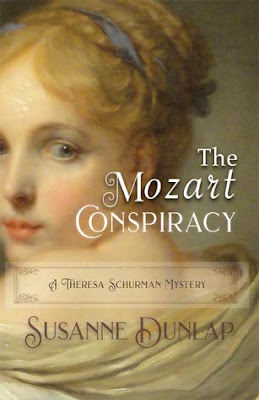 The first thing that readers considering a sequel generally want to know is whether it can stand alone.  My answer is that you can start with The Mozart Conspiracy, but why would you want to do that?  The Musician's Daughter is wonderful.

As my readers will know, women in the 18th century who had careers in the arts were rebelling against established conventions. Theresa was fortunate in having a violinist father who taught her and believed in her gift. This is believable because some prominent historical women in the arts and sciences of earlier eras were trained by their fathers.  The ancient mathematician Hypatia and the Italian Baroque painter Artemisia Gentileschi spring to mind as examples. Theresa was even more fortunate in having the composer Joseph Haydn as her godfather and mentor.  He is a significant character in The Musician's Daughter.

A Romani woman named Mirela played an important role in both the books that center on Theresa.  Theresa relied on Mirela's insight and assistance.  Theresa also had connections to Romani musicians that Haydn knew.  (I found a section of the Wikipedia article on Haydn and Folk Music  that deals with Haydn's relationship with the Romani and their influence on his music for those who are interested in this subject.)

Another female character in The Mozart Conspiracy that I wanted to bring up in this review was Constanze Weber, who later married Mozart.  I've seen Constanze portrayed as self-centered, greedy and manipulative elsewhere.  Dunlap shows her in a much more positive light.   It seemed possible that Theresa and Constanze could become friends in the future.

The Theresa Schurman mysteries contain themes that are relevant to me.  In The Mozart Conspiracy gender inequality and anti-semitism were the ones that I found most noteworthy.  I felt Theresa's distress when she was viewed as anti-semitic by some of the Jewish characters.

The mystery aspect of the book was handled very suspensefully.  The conspiracy referred to in the title of the novel remained unclear until the final reveal. Until then, it was difficult for Theresa to discover whodunit since it transpired that she couldn't be entirely certain about what was done.

Although I didn't like The Mozart Conspiracy nearly as much as The Musician's Daughter, I did enjoy reading it.  Yet one area of disappointment was the absence of Haydn.  If there is a third book in this series,  I'd love to see Haydn resume his mentor role in Theresa's life.