The Girls With No Names: Historical Novel About Wayward Girls

The Girls With No Names by Serena Burdick is the first book I've read that was published in 2020.  It's also my first digital review copy from Net Galley of the year.   I noticed a similarity to Before We Were Yours by Lisa Wingate which I liked very much and reviewed here. I was also drawn to Burdick's novel because it takes place in Inwood, a Manhattan neighborhood where I lived for four years in the late 20th century (though I should point out that the book takes place in the early 20th century.) Yet it was the reference to suffragettes  in the Goodreads description and the reference to the Triangle Shirtwaist Factory fire in the publisher's publicity which caused me to decide that I needed to review it for this blog.  It sounded like this novel could be a locus for intersecting feminist concerns.   So I accepted the publisher's request.  My honest reactions to The Girls With No Names can be found in this review. 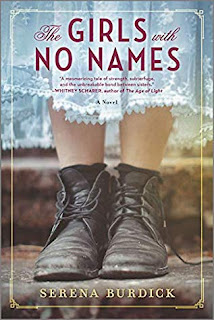 Although the main protagonists are teens, I wouldn't describe The Girls With No Names as a YA novel.  This book deals with the girls' coming of age under dire circumstances which involve mature themes that may be disturbing to some readers.

I found thirteen year old Effie remarkably brave when she comes to believe that she needs to rescue her sister from an institution with a rather horrific reputation called the House of Mercy.

I was also impressed with a girl that Effie encounters at the House of Mercy known as Mable.  Mable's tragic experiences  before her arrival at this home for wayward girls are portrayed movingly in flashback chapters.

The Girls With No Names turned out not to have a primary focus on women's suffrage. Still,  the book does include a real suffragette who is a minor character playing a pivotal role.  Her name is Inez Milholland.  I've linked her Wikipedia article because I think readers might want to know more about this woman activist. Milholland's Wikipedia article includes a public domain photo of her which I am reproducing below: 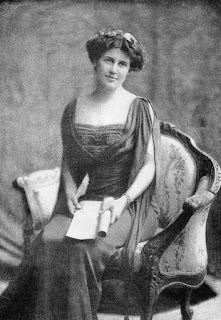 There are Romanii characters in The Girls With No Names.  Burdick tells us in her Afterword that they are called gypsies in the first person narratives taking place in 1913 in order to be consistent with usage in that period.  She is aware that Romani consider "gypsy" offensive, but Burdick isn't trying to offend. She just wants to be historically accurate. I was fascinated to learn from the Afterword that Burdick had discovered from her research that Romani really had camped in the Inwood area during this period.

I mostly liked the way the Romani were shown, but I did think that one element in their portrayal was anachronistic.  Effie got a Tarot reading at their camp which she regarded as significant.  The interpretation of the cards that appeared in the reading was similar to current day Neo Pagan Tarot readers.  So I considered it doubtful that an early 20th century Romani would approach the cards that way.

Despite the critical comment in the above paragraph,  I identified with both Effie and Mable and considered The Girls With No Names a powerful work of fiction.