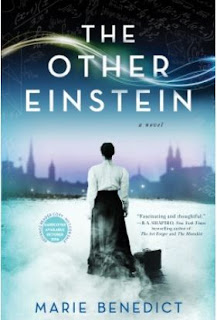 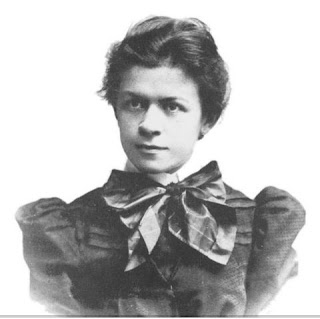 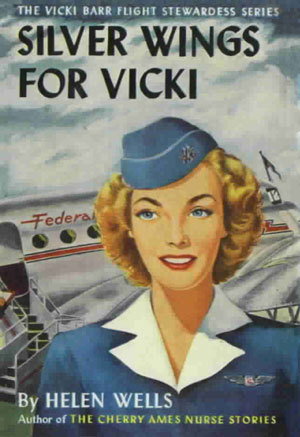 I was recently browsing in an antique store...my favorite pastime, yes, even more than reading, and I came across this old hardback book. And when I say old, I mean the copyright is 1947.

My curiosity was immediate and strong. I knew it had something to do with aviation by the little picture on the front. (My copy is just the hardback with the little woman's face.) I thought it was a pilot, but there was no blurb. I just took a chance.

It turns out it's the first in a series about a flight attendant in a time when aviation was really becoming a passenger thing. When planes were all aluminum and rivets and shown like sterling silver, when the DC3 was considered top of the line. And while this young lady, Vickie Barr, plays air hostess, she solves mysteries.

Now, the last set of old books I bought with a 1940s copyright, about a woman pilot, were ridiculous and unbelievable. But I liked this. It was just a fun, utterly charming, enjoyable read. The heroine could be called one of those Mary Sues or whatever they are, but yet..not quite. Despite her perfect family life and the way things fall into place for her, she has drive, works for what she has, appreciates many, and is very humble. Heart-in-the-right-place and doing-it-for-the-right reasons kind of humble.

She also learns quite a bit about flying, through the pilots, lectures, school.

If you were fond of Nancy Drew and ever desired to be a flight attendant, give this series a go. In this, the first installment, Vickie applies for the job (This was very interesting to me!! You'd not get away with these hiring practices or requirements now! LOL) and then goes to school. Once through school, she discovers a mysteries smuggling operation is using her flight for transportation...

There's also mild, fun romance and delightful bits of humor. I understand the first four books in the series were by Helen Wells, who also penned a nursing series. The author herself is fascinating. According to her bio on Goodreads, she was a social worker turned full-time young adult writer... In 1934 Wells graduated from New York University [where she'd been the first female editor of the literary quarterly], with a major in philosophy and a minor in sociology and psychology.

Best piece of fiction ever? No. A door stop? No. But it is the first book that has managed to hold my attention from beginning to end in quite a while and I thought it warranted sharing, this old gem.