Gone To Soldiers: A Novelistic Journey Through World War II With Some Amazing Guides

I have loved Marge Piercy's poetry and her science fiction novel, Woman on the Edge of Time.  For me, she is a feminist icon.  When I received a request from the publisher to review the new e-book version of her 1987 novel Gone To Soldiers, I decided that it was time that I read it.   When I agreed to review this book, I had no idea of its length.  I remember marking it as currently reading on Goodreads, navigating to the book's page on the database and seeing 800 pages for the first time.  Those who are daunted by carrying around a print tome, may prefer to access Piercy's saga on their e-readers or tablets.  I know that I did.  Yet next time I will check the page count beforehand, so that I can give the publisher or author a more realistic time frame for when they can expect a review.  I received a free copy from the publisher via Net Galley in return for this honest review. 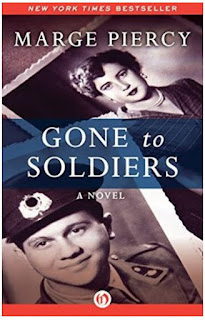 The title comes from the Pete Seeger protest song, Where Have All The Flowers Gone? .  The Wikipedia article that I've linked reveals that Seeger wrote it in 1955,  but it's inextricably linked with the 1960's anti-war movement.   So I expected that Piercy wouldn't have idealized WWII.  I imagined that her depiction of the war would be more ambivalent, and I wasn't wrong.   Readers can expect to find suffering, death and horror in Gone To Soldiers, but also compassion, bravery and triumph.

For Book Babe's readers, it's important to note that much of the narrative is a story about women, and some were extraordinary.   My personal favorites were Jacqueline, Bernice and Louise.

I'll start with Louise because Gone To Soldiers opens with her perspective. Originally, I wasn't impressed with her.  The multiplicity of her talents, her fortitude and resilience are gradually revealed over the course of the narrative.
As a journalist, Louise's travels bound the characters together.  Although Jacqueline and Bernice never met each other, Louise had the opportunity to interview both of them.

Louise encountered Bernice first.   Bernice was a pilot, and eventually joined the Women Airforce Service Pilots (WASP). Her entire life was focused on flying--getting an opportunity to fly, and then trying to find a way to keep flying.  Readers may be astonished by how far she was willing to go to continue being a pilot after the war was over.  Her refusal to ever give up on her dreams was what I admired most about her.  Longtime readers of this blog will know that the WASP has been a special focus of Book Babe, but there may be some of you who know little or nothing about them.  To learn more about the WASP,  I recommend The WASP Official Archive at Texas Women's University.

Jacqueline began as a sheltered Paris teenager who I found immensely irritating because of her complete lack of empathy.  The German occupation of France shattered her life and reshaped her personality.  The crucible of war and oppression accomplished the most marvelous metamorphosis for this character.  It also fundamentally changed her priorities and her loyalties.  I respected Bernice and Louise a great deal, but I came to love Jacqueline.  Her struggle to survive truly moved me.

My favorite male characters were Daniel and Bernice's brother, Jeff.   Daniel had a tremendous facility for languages and a preference for Asian cultures.  I found him unusual, and I learned a great deal from his experiences.  Jeff was an artist, but he desperately wanted to do something heroic so that his life would mean something.  I think that his life did mean something because he lived and loved with intensity, authenticity and a sense of commitment to everything he did.

The viewpoint characters in Gone To Soldiers illuminated a number of aspects of  the world they inhabited.  Even when I didn't particularly identify with a character, I felt that I understood more about each slice of the realities of WWII that these characters represented. It is often said that a novel is more than the sum of its parts, but I believe that it was the segments of individual perceptions that gave this book significance. 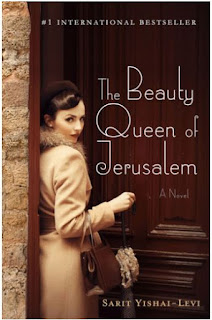