The Peddler of Wisdom: A Tale of A Village Revolt

I'm glad to be reviewing a historical fiction with a strong woman protagonist during women's history month.  I won a digital copy of The Peddler of Wisdom by Laura Matthias Bendoly in a giveaway on the Historical Fictionistas group on Goodreads.  The author sent it to me as a gift from Amazon, and this is my honest review. 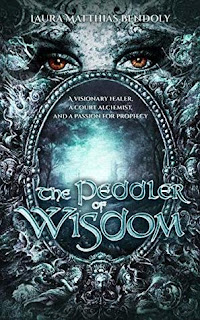 Central character Irène Guéri is a healer and a diviner who resides in Les Échelles, a fictional village in the south of 17th century France. Les Échelles was invaded by an army of  Sardinians led by Domenico, a tyrannical nobleman with strange obsessions that involved cruel practices.  When Domenico demanded that the villagers consult his alchemist/physician instead of Irène, I expected that she would become the victim of a witchcraft hysteria which were quite common in the 17th century.  It turned out that I was being too pessimistic.  While there were a few collaborators with the invaders,  most of the village wanted to resist Domenico. So Irène became a rebel. I love women who take a stand.

There were other amazing female characters. One of them was Bijou, a female raptor who was very protective of Noisette, the ten year old girl who'd adopted Bijou.  I was also impressed by the courage of  Irène's closest friend, Simone.

There's a romance element in The Peddler of Wisdom.  We even get a HEA ending.  Yet I wouldn't categorize this novel as a romance.  I think that the romance content is insufficient.  I would say the same about characterizing The Peddler of Wisdom as a fantasy.  There is a great deal of discussion about magic, but there are relatively few magical acts.

I wouldn't count Irène's Tarot readings as magic.  For me, they exhibit insight/intuition.   Some would say that the 17th century was too early for Tarot divination since the earliest historically recorded use of Tarot for that purpose was in the 18th century.  Tarot images were originally utilized for playing cards, not as divination tools.  I should point out that recorded history has tended to focus exclusively on the doings of the wealthy and powerful.   Irène learned about divination with Tarot cards from a Romani woman.  It seems to me at least possible that the Romani might have been reading Tarot somewhat earlier than history indicates.

The Romani are called "gypsies" in this book.    I have been guilty of using the term "gypsies" myself, but that was before I learned the history of  "gypsy" as a pejorative.  It's enough for me that members of this ethnic group prefer Romani.   My policy is that people should be called what they want to be called.  Of course, 17th century Irène wouldn't have known better.  It did bother me that Irène was insulting toward Romani  at the end of the book.   Hurtful stereotypes about the Romani have been common and they still do have a great deal of currency.  Irène seemed advanced in a number of ways.   That comment caused me to think less of her.  It also left a bad taste in my mouth since it was literally the last thing Irène said.

The protagonist of The Peddler of Wisdom was by no means perfect, nor did she need to be perfect.   Characters seem more real if they have flaws or complexity.   A number of characters in Bendoly's book were well-developed including the villainous tyrant Domenico who had a background, and an unpredictable degree of ambivalence.

I had some minor problems with this novel that I won't discuss here.  I did like The Peddler of Wisdom for the most part, and was glad to have the opportunity to read it.
Posted by Shomeret at 7:17 PM 5 comments: