The Moon Sister  by Lucinda Riley is the fifth novel in the Seven Sisters series.  I reviewed The Pearl Sister which was the fourth book on this blog here.  I was delighted to be again selected for the blog tour by Atria, the publisher.  I received a review copy from them via Net Galley.  This post includes my  review.

ABOUT THE MOON SISTER:

Tiggy D’Aplièse spends her days experiencing the raw beauty of the Scottish Highlands doing a job she loves at a deer sanctuary. But when the sanctuary is forced to close, she is offered a job as a wildlife consultant on the vast and isolated estate of the elusive and troubled laird, Charlie Kinnaird. She has no idea that the move will not only irrevocably alter her future, but also bring her face-to-face with her past.

At the estate, she meets Chilly, an elderly Romani man who fled from Spain seventy years before. He tells her that not only does she possess a sixth sense passed down from her ancestors, but it was foretold long ago that he would be the one to send her back home…

In 1912, in the poor Romani community outside the city walls of Granada, Lucía Amaya-Albaycin is born. Destined to be the greatest flamenco dancer of her generation—and named La Candela, due to the inner flame that burns through her when she dances— Lucía is whisked away by her ambitious and talented guitarist father at the tender age of ten to dance in the flamenco bars of Barcelona. Her mother is devastated by the loss of her daughter and as civil war threatens in Spain, tragedy strikes the rest of her family. Now in Madrid, Lucía and her troupe of dancers are forced to flee for their lives, their journey taking them far across the water to South America and eventually, to North America and New York—Lucía’s long-held dream. But to pursue it, she must choose between her passion for her career and the man she adores.

Featuring Lucinda Riley’s “addictive storytelling with a moving, emotional heart” (Dinah Jeffries), THE MOON SISTER follows these two women bound across time and distance on their journey to discover their true futures—but at the risk of potentially losing the men they had hoped to build futures with. 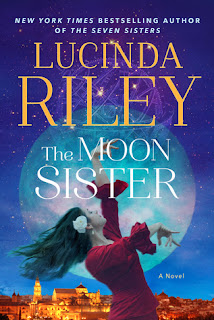 I've wanted to read this book ever since I first saw the summary. I loved both female protagonists of this dual period novel.

I admire those who like Tiggy are dedicated to preserving threatened animals and their habitats.  Tiggy also faced down sexual harassment and numerous revelations that impacted her sense of identity when she discovered her Romani birth family in Spain.  Yet she remained focused on her vocation to protect animals. She has been criticized in a Goodreads review for not being a consistent vegan.  A vegan once told me that dairy foods were the most difficult animal products for her to give up, and that she struggled with eliminating dairy for years.  Even principled vegans may have difficulties. Becoming  a vegan can be a process.  I feel that Tiggy is a strong woman who always remained true to the central core of herself throughout the novel.

I've had a love of flamenco dancing and a fascination with the trance state called duende ever since I first learned about its existence in the Highlander: The Series episode Duende. This is why I identified with Lucia's dedication to flamenco.  I felt that her strengths lay in being loyal to her gift and to family.

I thought that The Moon Sister was a moving portrayal of these memorable characters.

Lucinda Riley is the New York Times bestselling author of over twenty novels, including The Orchid House, The Girl on the Cliff, and the Seven Sisters series. Her books have sold more than fifteen million copies in over thirty languages globally. She was born in Ireland and divides her time between England and West Cork with her husband and four children. Visit her online and learn more about The Seven Sisters series at LucindaRiley.com.