I won Josephine Baker's Last Dance by Sherry Jones about two years ago through Goodreads Giveaways and I recently finished reading it.  Yes, I know.  I'm a disgrace.  It's just that I tend to prioritize blog tours because I need to post on a definite date. Then there's the authors, publishers and publicists who contact me directly about a book asking me to review it within a certain time frame.  Having a specific deadline works best for me.   Goodreads Giveaways don't even require reviews.  I still like to post reviews of those I won from that source when I have the time.  The last time I reviewed a Goodreads Giveaway win, it was 2019, and I reviewed it only on Goodreads. That's what I tend to do when the review is going to be relatively short, and I haven't been asked to review the book on a blog.

I've read three novels by Sherry Jones previously.  The first two were the books devoted to Mohammed's daughter, Aisha.  They were The Jewel of Medina and The Sword of Medina which I reviewed on Goodreads.  I participated in the blog tour for Jones' Heloise and Abelard novel, The Sharp Hook of Love. That post appeared on this blog here .   I didn't expect that it would take this long for a review of a  fourth Sherry Jones book to appear. 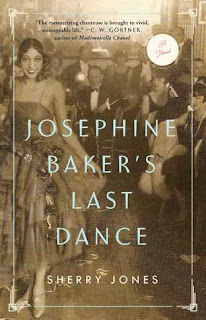 I've never read a novel about Josephine Baker.  In fact, the only other one that I found online is a graphic novel that can be found on Goodreads  here.  So Josephine Baker is an unusual subject for a novel.  I had heard of her, and wanted to know more about her life.  That's the reason I entered the Goodreads giveaway.

Although Josephine Baker was born in the U.S., as a Black woman she couldn't be a great star in  America during the first half of the 20th century, as she was in Paris.  This is why she lived in Paris for almost her entire adult life.  The French song that is most associated with her,  "J'ai Deux Amours" expressed her affection for her two loves, her country and Paris.  As a narrator, Sherry Jones commented that her country didn't love her back.  When she was in the U.S. , Josephine had to contend with race prejudice and segregation.   She wasn't immune to them because of her success in Paris.  She came back to the United States at one point with the purpose of organizing a campaign against segregation.  I had no idea that Josephine Baker had briefly been a civil rights activist during the 1950's.  I considered that aspect of her life, the biggest revelation in Josephine Baker's Last Dance.

I tried to understand Josephine Baker's orientation toward marriage. On the one hand, she seemed to believe that she ought to marry a man if she was in love with him.  This happened a number of times.  On the other hand, she didn't want a man to control her life.  Husbands and men who aspired to be her husband were likely to try to make decisions for her.  One man who wasn't legally married to her actually pulled off a masterful effort to keep Josephine under his thumb that I  thought was only possible for husbands.  I could only imagine that she was too involved in her career to notice what he had done.   I am happy to say that she extricated herself from that adverse situation without the help of a man.

My only disappointment with this book is that Sherry Jones tantalized me with the idea of Josephine Baker as a pilot, but never gave me any more than two bare mentions of it.  I love reading about women in the history of aviation, and in fact woman pilots is a major focus of this blog.   So don't tell me that Josephine owned a plane and had flying skills, but never give me even one scene of her flying.  I felt deprived.   I would have given this book five stars on Goodreads if  there had been piloting sequences during the period of Josephine's life when I thought it most likely that this could have happened.

I could have loved Josephine Baker's Last Dance, though I did like what we were given very much.  Josephine was really an extraordinary woman with great gifts that have lived on in the history of performing artists. Yet I did want to have more detail about her contributions in other areas.   Perhaps another author will one day write that Josephine Baker novel.  On that day, I will celebrate.

Posted by Shomeret at 2:51 PM No comments: