Nothing To Do With Books Whatsoever... 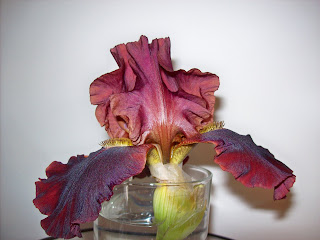 Is this not the most beautiful iris you have ever seen? A fellow at work brought me this Thursday and it was just an unopened bud. I brought it home and placed it in a glass of water and while I was blogging last night on here, had the pleasure of watching the first petal fall open. And this is what it looked like when I got up this morning.. I just had to share. It has nothing to do with books, but I couldn't resist.
Posted by Tara at 11:59 AM 2 comments:

The Profiler: My Life Hunting Serial Killers and Psychopaths by Pat Brown

How many of you work with psychopaths?????

While reading this book, I found myself eyeing my co workers and checking the psychopath trait checklist. It's unbelievable how many of them are running around! In this book, Pat Brown, self trained profiler talks about psychopaths, their traits, and what makes some of them cross the line to become serial killers. Part one is about a murder that hit too close to home and how it inspired her to educate herself and become a profiler.

Part two talks about eleven different cases she was called in on and has profiled. I want to make one thing clear here.. Pat brown is not an FBI agent running around with a 9mm and interrogating criminals in cement interrogation rooms. She is a housewife (and sign language interpreter) that has spent numerous years educating herself and upon being called in by the victim's families, analyzes the facts and offers her opinion. All eleven cases conclude with who Pat Brown thinks did it and why she came to that conclusion. Most of them have never been arrested. Most of the cases are still unconcluded. (I'm shocked at how poorly our criminal justice system is doing.) However, I enjoyed this book and the insight it offers into psychopaths, serial killers, and possibly, the very people around us everyday. It's not for the squeamish as there are very descriptive crime scenes and MOs.

One minor complaint: The author tends to repeat the facts of a case over and over. This did not detract from overall enjoyment of the book tho.

I was really disappointed in this. I thought I was getting a historical novel that would explore the magic and beauty of West Yellowstone, but except for when the grizzly bears made their appearances, I didn't enjoy it much. The heroine is a most unlikeable petulant, whiny, spoiled brat and snob. When her mother was suicidal, all Maggie could think was how embarassing her mom was. It was all ME, ME, ME. Now that her mom is missing or dead, all Maggie can think about is her debut ball and dresses and Edward. Even when her father drags her to Yellowstone from their comfy residence in Newport by implying her mother may be there, Maggie thinks, "Oh I want to find my mum but it must be in time for my ball!!" (That's not a direct quote.)

Upon arrival in Yellowstone, the action does start to pick up a bit and the story does take some interesting turns, BUT I never did grow to like the heroine. She goes from a spoiled snot to a wimpy weak sniveling baby. I mean, she is afraid of a doe for crying out loud! There's a mystery involving Maggie's dead/missing mother, family secrets to be uncovered, love at first sight with a simple man named Tom, and an unplesant suitor that her father wants to force Maggie to marry. That bout sums it up. A miss for me.

I bought this thru Amazon's pre orders. I understand there is a sequel coming out in 2011 for those that did like this one.

Historical Fiction HIT: To Defy A King by Elizabeth Chadwick

I broke my ten dollar rule for this book (Book Depository, free shipping!).. something I hardly ever do and guess what?? I don't regret it!

If you are looking to immerse yourself in medieval England, look no farther than this novel. Not only will you feel as tho you are really in the story, but you will gasp in shock, smile, chuckle here and there, and at one point, shed a tear or two. On top of all that, you will also learn about King John's reign and the rebellions that ensued throughout.


Spirited daughter.. Mahelt is the daughter of William Marshall, the greatest knight. It's no great surprise that she throws salve in her brother's faces while "defending her castle" and is the first one to meet her father when he comes back from his excursions. She is not only spirited, but deeply loyal. Throughout the novel, her strong family ties and loyalty remain no matter the circumstances she finds herself in.


Rebellious Wife.. Her marriage to Hugh Bigod combines two of the greatest families in England. When faced with a domineering father in law, Mahelt refuses to allow him to always have his way and even goes so far as to jump fences in the night to meet her brother. She may be a Bigod in name, but her heart is still a Marshall. This causes much friction between her and Hugh, her husband. Meanwhile, King John is ruling England as tyrant and even he will not get his way with Mahelt.


Powerful Woman.. This is woman that will stand up the king and refuse to allow him to take her child. King John is man known for "taking hostages" of the noble children and often even killing them for their parents supposed crimes. Mahelt must protect her children at all costs. Perhaps "Protective Mother" should be added to the front cover. The novel is not all about Mahelt tho. There is much history about England during these turbulent times with King John, war with France, and shifting loyalties. Other characters play major roles in the novel and their stories are just as intriguing. To mention a few: Roger Bigod and his wife, Ida. Also, Ida's son by a previous king, Longespee and his wife, Ela have their own tale and issues entwined into the novel.

Superb. I'm blown away by this one.

This has been a fun and exciting read. It makes me think "James Bond for women!"

Mary Jane is a former Air Force fighter pilot who reached the rank of Major before being discharged over her refusal to wear a veil while stationed in Saudi Arabia. Fate plays funny tricks tho and Mary finds herself back in Saudi Arabia wearing an entire burqua (or black bag) while repossessing a Boeing 747 from the hands of a Saudi prince. Jesus Martinez is her partner and co pilot in getting this mansion with wings off the ground and out of the country before the prince or Arabian authorities can realize what is happening.

There are disguises, fake passports, major amounts of money changing hands, and suspicious characters left and right. Mary and Jesus even agree to a bit of human trafficking in a way. A French man has been held in Saudi Arabia against his will due to a construction misunderstanding and Mary and Jesus have been asked to take him on as a passenger. As if the stakes are not high enough, the prince's wife approaches Mary asking for help leaving Saudi Arabia as well. Even tho the 747 can carry 400 passengers, things just may get a bit crowded as the risks get riskier.

The intrigue doesn't stop with the repossession of the plane.. rather things get even more exciting as Mary and Jesus have an angry husband and prince on their tail, money and gold bars to get thru customs, and possibly a fake aircraft lease.

Superb and fun. I would love to see this made into a series, more aircraft repo adventures involving Mary Jane and Jesus Martinez.