I've read two books by Elizabeth Wein dealing with female pilots, and reviewed one of them on this blog here.  Female pilots are a focus of  this blog. Wein created some memorable women and girls flying planes in  Rose Under Fire  and Black Dove, White Raven.

I do need to point out that Julie, the central character of The Pearl Thief , isn't a pilot.  She's the spy protagonist of Wein's Code Name Verity which I didn't read because it was written in a way that didn't hold my attention.  There's supposed to be a movie in development.  If this film ever manifests, I suspect I will like it better than the book.

The Pearl Thief  is a prequel about Julie's early life in Scotland.  So why would I want to read the prequel to a book I didn't even like, and why would I think the review should be posted to Flying High Reviews?   You'll have to read my review to find out the answer to these questions, but I'll tell you right now that I did read every wonderful page of The Pearl Thief. 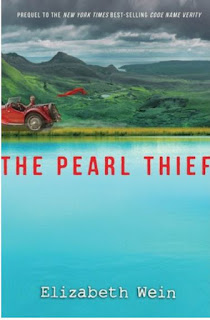 The main reason why I wanted to read The Pearl Thief is because British Travellers are prominent in the plot.  Travellers are often confused with the Romani who are now believed to have originated in India.  Travellers are native to Britain.  They were also called Tinkers because they mended pots and kettles, but the term Tinker was used as an insult.  Elizabeth Wein serves up intriguing snippets of the history and culture of Travellers in this novel.  I'd love to find out more.

Yet this blog is supposed to center on strong female characters.  Are there any in The Pearl Thief ?  You bet! First and foremost is the Traveller girl, Ellen who braves prejudice and abuse whenever she tangles with people in authority.   She's also fiercely loyal to her family.   Another strong female character is Ellen's dog Pinky who also exhibits bravery in the face of any threat to Ellen. Julie is willing to challenge convention by calling Travellers friends and defending them.  She also occasionally dressed in a man's kilt and was mistaken for a boy.

Another reason why I wanted to read this latest book by Wein is that it's a mystery beginning as a missing person case.   I am a fan of the mystery genre and this one involves several surprising twists. So this is an absorbing and well constructed mystery with great characters and a strong statement against prejudice.  I expect this to be one of my best reads of 2017.

Posted by Shomeret at 7:10 PM No comments: