I've been reviewing the novels of Roma Nova on this blog.  These are alternate history books dealing with a matriarchal society written by Alison Morton. I'm going to list them in chronological order. You can find the reviews of  the 20th century Roma Nova novels Aurelia, Insurrectio and Retalio at their hyperlinks. Three 21st century Roma Nova novels have been reviewed at Inceptio, Carina and Perfiditas. If you read these reviews, you will find out about the series premise, protagonists and story lines.

Roma Nova's origins go back to ancient times. I'd been hoping that Alison Morton would one day reveal the details of Roma Nova's founding.   She has chosen to deal with how Roma Nova was established in the format of  short stories within an anthology that spans Roma Nova's history called Roma Nova Extra. I can't say that the entire history of Roma Nova is covered in this collection.  There could conceivably be Roma Nova stories set in the Renaissance or the 18th and 19th centuries, but for now I will be content with what we've been given.

I pre-ordered this anthology on Amazon, but had to wait until I had sufficient time to read it between review commitments. 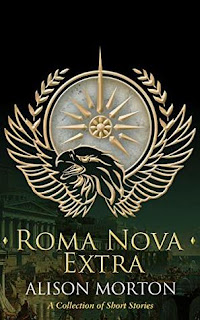 The tales that took place in ancient times more than fulfilled my expectations.

I loved  the independence of Julia in "The Woman in the Market" and her commitment to her Celtic heritage. These beliefs stiffened her opposition to demands for submission from her husband and the local Christian bishop.

Yet my favorite story in the anthology was "Victory Speaks" which was from the perspective of the statue of the Goddess Victory which stood in the Senate of ancient Rome.  It was slated for destruction by Christians.   Perhaps the decline and fall of the Roman Empire was caused by the Goddess Victory withdrawing her support.  I considered this a powerful story and was very moved by the ending.

I normally don't read every story in an anthology, but the only story I skipped in Roma Nova Extra was one I'd already read in the alternate history anthology 1066 Turned Upside Down which I reviewed here .  All the remaining stories held my attention which makes Roma Nova Extra a superior collection.