Megge of Bury Down: A Family of Healers and Seers in 13th Century Cornwall

Megge of Bury Down is a historical fantasy.  It's the first novel by Rebecca Kightlinger who writes reviews for the Historical Novel Society. The focus is on a young girl in medieval Cornwall whose mother is a healer/midwife.  Most of her mother's work involves no magic.  Megge's aunt is a seer.   Her family does do magical rituals and they are believed to have been cursed.  Beliefs about magic and witchcraft play a major role, and so do the books about healing and prophecy that have been passed down in Megge's family.  Reincarnation and messages from the spirits of ancestors could be considered the most fantastical elements for readers who prefer their books more grounded in the world of the five senses.  I chose to read this book because I like paranormal content, but if you are one of those who like your historical fiction without such elements, Megge of Bury Down probably won't be for you.

I received a review copy from the publisher via Net Galley in return for this review. 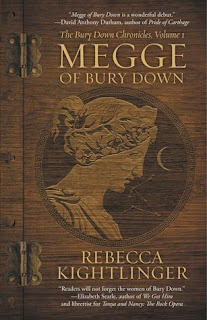 The historical aspect of Megge of Bury Down is very well-developed.  We are constantly aware that we are in the 13th century through the vivid descriptions of Megge's experiences, and the attitudes of the villagers.  Megge is thoroughly medieval and so are her neighbors.  The fear of a witch hysteria is palpable.  It hovers over Megge's family.

In the medieval period children were expected to follow in the footsteps of their parents.  Megge's reluctance to become a healer like her mother alienates her from family and heritage.  It seemed to me that Megge sensed things that others in her family didn't sense.   She had a destiny of her own.  Over the course of the narrative, both the past and the future become clearer to Megge.  This knowledge shapes her perception of herself, and  I could finally see her as a strong protagonist.

I noticed that the lore that was handed down in Megge's family was syncretic which means that it came from a variety of cultures.  I identified Roman, Greek, Egyptian and Norse elements.  There may be others.  Since the voices of this tradition were numerous and their history reaches back a thousand years, syncretism seems more authentic to me than a culturally pure unitary transmission. Through Megge of Bury Down Rebecca Kightlinger honors multicultural diversity while still staying true to the period in which her novel was situated.