The Book Woman of Troublesome Creek: Skin Color As A Litmus Test For A Packhorse Librarian

I recently discovered The Book Woman of Troublesome Creek by Kim Michele Richardson which deals with a Kentucky librarian who delivers books to people in the hill country riding a pack mule in the 1930's.  I love librarians and I'm interested in the hill people, so I checked this novel out of the library.

I understand that there are two other books that deal with this topic.  They are The Giver of Stars by Jojo Moyes and a children's book called Wonderland Creek by Lynn Austin.   I may read them because I am so interested in the way librarians and hill people are portrayed.  I understand that Kim Michele Richardson lives in Kentucky, and that reviewers have considered her authentic.  Since I don't live in Kentucky and have no knowledge of Kentucky hill life in the 1930's, I can't comment on the book's authenticity. 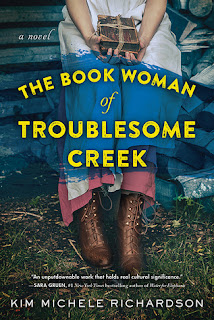 Female protagonist Cussy had a hereditary medical condition that caused her skin to be blue. This is a real genetic disease called methemoglobinemia.  Her father, who also had the same condition, imagined that there was a man in Kentucky who could overlook her blue skin and marry her.  This would have to be an unusual man since most people in the area were deeply prejudiced against anyone who was different.  Cussy was aware of this problem, and didn't imagine she would ever marry.  Besides, she found her life as a Pack Horse Librarian satisfying.   She loved delivering reading material to people who had no access to libraries, and finding what they really wanted to read.  Yet it's important to note that Cussy only had access to discards which were books that other libraries didn't want or need in their collections.  Discards were Cussy's "new" books.

Queenie, a black librarian who had also been delivering books in the hills of Kentucky, decided to go to Philadelphia.  She wrote to Cussy that there were colored doctors there who would treat her sick grandmother, and colored schools for her children.  Cussy thought there were opportunities for blacks in Philadelphia, but not for blues like her. She was probably right.  It was unlikely that Philadelphia would be any better for her.  There wouldn't be blue doctors there, or schools for blue students.

For another perspective, I'd like to mention a novel I'd read some time ago dealing with a blue skinned alien who thought himself superior to humans.  I reviewed it here .

Harriet Hardin, the assistant supervisor at the library center, was a bigoted character that I very much disliked.  Yet her favorite book was The Stars Look Down  by A.J. Cronin which was a sympathetic portrait of a British mining family in the 1930's.  To us this would be historical fiction, but for Harriet and the other characters in this novel, it would have been considered contemporary fiction taking place in the present day.  I haven't read any A. J. Cronin, but I suspect I would like The Stars Look Down myself.  I have put a hold on it.  So we shall see. I noted that this novel was considered similar to The Ragged Trousered Philanthropists by Robert Tressell and put a hold on that one as well.

This book also led me to a highly regarded classic, The Good Earth by Pearl Buck.  Cussy was given the sequel, Sons, by a library patron who turned out to be a very pivotal character.  I looked up The Good Earth and decided that I should read it. After I finish it, I'll see if I want to read its sequels.

No review that I've seen of The Book Woman of Troublesome Creek has mentioned medical research as one of the issues brought up in this novel.  Doctors wanted samples of Cussy's blood.  It seemed to me that the doctors were more interested in benefiting their own careers than Cussy.  They gave her a drug that had side effects.  Discussing the impact of the drug would be a spoiler, but I consider this racist medical research based on white supremacist ideology.  I applaud Kim Michelle Richardson for showing us so vividly that medicine can be racist.

As a feminist, I was struck by Cussy receiving a letter with a Susan B. Anthony stamp and not knowing who that was, or the meaning of "Suffrage for Women" which was written beneath the stamp.  I was sad that Cussy had never learned about the women who had struggled for women's suffrage, and I wondered if she had been taught about the 19th Amendment to the United States Constitution or its ratification on August 8, 1920.

The Book Woman of  Troublesome Creek made me sit up and take notice of a Kentucky that was unknown to me, and showed me the tough librarians who supplied Kentuckians with books in all times and seasons.

Posted by Shomeret at 4:20 PM No comments: