The Girl From Berlin: A Legal Thriller Dealing With A Woman Violinist and Holocaust Survival 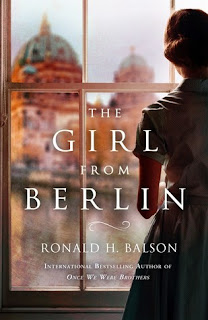 In most dual period books, I prefer one of the narratives more than the other, but in the Ronald Balson  Liam Taggart and Catherine Lockhart books I've read both continuities feel equally exciting and significant.

The Girl From Berlin has a contemporary story line that focuses on an elderly woman with an award winning vineyard in Tuscany who is being outmaneuvered legally by a large corporation that wants her land.   I was definitely rooting for Gabriella Vincenzo to get justice.  There is also a mystery in Gabriella's history and the history of her estate's ownership.  That's where the memoir of  musician Ada Baumgarten comes in.  We eventually learn about the connection between Gabriella and a German Jewish violinist.  We also discover the truth about the struggle over this Italian vineyard through the mesmerizing story that Ada tells about her life.

This post belongs on Flying High Reviews because at its heart The Girl From Berlin is about strong women.  It's about Gabriella Vincenzo who refuses to surrender her land.  It's about two equally determined woman lawyers--one of whom is Catherine Lockhart.  The other is the Italian lawyer who is found to represent Gabriella in court.  Then there is the magnificent Ada Baumgarten whose talent was regarded so highly that she received standing ovations in Hitler's Germany.  Yet Ada had Nazi enemies that threatened her survival.  She remains in jeopardy during the climax of the World War II portion of her narrative.  Finding out what happened to Ada kept me at the edge of my seat through horrific dangers and amazing triumphs over adversity.

There were also courageous men who played supportive roles in the lives of these women. Mentioning all of them would be too much of a spoiler, but I have to give plaudits to at least one. As a PI who is Catherine's husband, Liam Taggart is the ongoing male protagonist of the series. Liam and Catherine worked as a team in this novel.    He did whatever was necessary to bring the Gabriella Vincenzo case to a successful conclusion.

The historical story line about Ada Baumgarten was intense, and I found her musical achievements inspiring.  At the end of the contemporary narrative, I wanted to applaud.   You will not want to miss out on reading The Girl From Berlin.