Chinawoman's Chance: First In A Series About A Pioneering Woman Lawyer

When I nominated Chinawoman's Chance on Kindle Scout for an opportunity to be published by Kindle Press, I hadn't heard of its real historical protagonist Clara Shortridge Foltz, the first woman admitted to the bar in California in 1884.   This historical mystery novel wasn't selected by Amazon.  So author James Musgrave self-published and offered all those who had nominated his book a free copy.  I eagerly accepted one, and I am now posting my honest review. 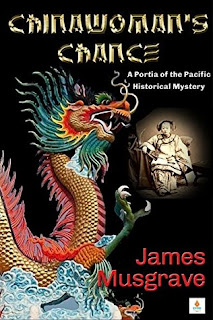 My original intention was to praise this cover's illustrations for drawing my attention to the book.  Yet when I copied and pasted the cover to this blog, I noticed for the first time that the title isn't very legible.  If I hadn't already known that the title was Chinawoman's Chance, I wouldn't have learned it from this cover.   Is the legibility of the title on the cover important for a self-published book?  I would argue that it is important. Readers often look at the cover before anything else on a  book vendor site.  Not being able to read the title creates a bad first impression for a reader deciding whether or not to buy the book.

Next I turn to the series title which is Portia of the Pacific. Yes, titles are very important to me.  They influence me more than cover illustrations.   I have an attraction/repulsion relationship with Shakespeare's Portia.   So  I was attracted by the series title because I love a woman taking a professional role that was forbidden to women in Shakespeare's day.  I love Portia's speech.  Yet  I am repelled by the bigotry toward Shylock that motivated her.  I see Shylock as the victim in Merchant of Venice.   His feelings of outrage over having no rights are used against him.  Portia is clever, but she is supporting a system in which Jews can't get justice.

The fictional Clara Shortridge Foltz isn't bigoted toward the Chinese.   Not only does she have a Chinese client,  but she helps to thwart a plot against the Chinese community. Yet I learned from Musgrave's acknowledgements that the real Clara Foltz was actually prejudiced against the Chinese and would never have had a Chinese client as she did in Chinawoman's Chance. For me, there is a tension between the real Clara and the fictional Clara.  I ended up feeling as ambivalently toward the protagonist as I do toward Shakespeare's Portia.

For those who want to see what Clara Shortridge Foltz looked like, I found a public domain photo on Wikipedia. 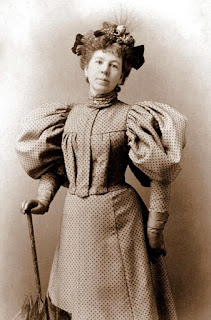 I admired the role played by the fictional Clara Foltz, but I felt that the novel fell short as a mystery.  There was a plot twist that I didn't find credible from a police procedural perspective.   I also felt that the resolution was formulaic.  I had seen it before a number of times, so it didn't surprise me.

I also had a problem with a Chinese character's name.  Musgrave said in his acknowledgements that he researched Chinese culture.  If so, I don't understand why he didn't seem to know that Guan Shi Yin, also known as Kwan Yin, is a Bodhisattva.  A Bodhisattva is someone who has reached Buddhist enlightenment and decided to help others achieve it.   Kwan Yin is also known as the Goddess of Compassion.  I was taught a mantra for Kwan Yin "Namo Guan Shi Yin pusa."  The English translation would be: Homage to Kwan Yin, compassionate and wise person.  The character in Chinawoman's Chance who was given this name was the reverse of compassionate.   I therefore considered it culturally inappropriate.

I actually did like most of  Chinawoman's Chance. Musgrave's version of Clara Foltz  has so much potential as a protagonist. Her developing friendship with a Chinese woman who escaped prostitution and encouraged independence for other women was also wonderful.   Yet as a mystery it didn't quite measure up, and the instance of cultural inauthenticity that I mentioned really bothered me. 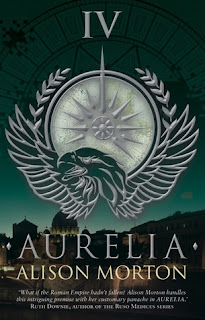