This is a story about a young Maryland woman in 1936 who gets to be on the American Olympic swim team and go to Berlin for the games.. At the age of 82, she is telling her story for the first time to her son, Teddy. And what a story it is.. 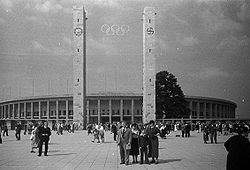 First of all, I am normally very bothered by stories being told, rather than showed. However, I loved the way this one was done. Sydney tells her son her entire story, but she does it in such a way that the reader can visualize everything. She also injects bits of humor on every page and I found myself smiling or chuckling at the way she worded things. Here's an example: While telling Teddy of her first foray into the girl's locker room at a competition in Chicago, Sydney injects humor into her reminscing of being self conscious about her nakedness, "of course, it was just girls, but girls aren't like boys. I know the way you all are, a bunch of exhibitionists, all runnin' around with your whatzits flyin' in the breeze, thinkin' you're Greek gods, snappin' towels at each other's behinds and so forth, but girls... well, we value a certain amount of privacy..." **Note: I do have an ARC so the above prose may be changed in the final hardcover.**

Anyway, Sydney begins her tale with swimming in the river by her home. What started as a simple hobby and a way to deal with her father's recent death leads to a whole new life when she competes in a nearby local swimming competition. She catches the eye of the right person and soon her life is swim practice and Olympic finals. She even gets to swim and hob nob with Eleanor Holms, a 1932 Olympic champion. 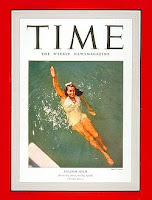 Eleanor Holms on the cover of TIME

Sydney doesn't make the 1936 Olympic team, but when Eleanor Holms has a little too much fun on the nautical voyage to Berlin and angers one very important man, Avery Brundage, Eleanor is kicked off the team (this really happened) and Sydney is on her way to Berlin as her replacement. As luck would have it tho, due to an official technicality and Mr. Brundage acting before doing his research, Sydney is not allowed to swim in the Olympics, but is she allowed to stick with the team. Enter another interesting real life character, Leni Riefenstahl, a German movie producer among other things. Leni is shooting video footage of the swim team and one of Leni's assistants is none other than a very handsome Horst who sweeps Sydney off her feet.

After a wonderful, whirlwind romance with Horst and experiencing the 1936 Olympics, Sydney must go home but her love for Horst never ends. However, circumstances have her marrying an American soldier named Jimmy. What happened to Horst? Would it have anything to do with Germany going to war soon after the Olympics? Upon marrying Jimmy, is Horst out of her life? Hearing this tale, Teddy has more questions than answers. He's also a little bit bothered by the fact his mom loved a man other than his father, Jimmy. (And kissed him standing up numerous times! LOL) He takes his mother's written memoirs to read and finish the story. What he reads may shock him and change his opinion of his mother forever...

I was shocked. I was shocked that I was so drawn into this tale about a swimmer, the Olympics, Germany, a summer romance, a love gone bad, the early days of World War 2.. I found myself googling the 1936 Olympics and looking these characters up. I was shocked by ending too. It has nothing to do with swimming or the Olympics. At that point, it's all secrets, intrigue, the war, and one very big surprise. This def gets a 5/5 stars.

Katherine Rawls, a member of the 1936 U.S. swim team
I requested and received an arc of this book from Overlook Press. Tho greatful to the publishing company, I am completely unbiased in my review of this book.