The Suffragette Scandal--Some of The Best Romance Dialogue Ever!

I haven't reviewed a suffragette novel in 2018.  It's about time that I did.  Suffragettes are my favorite historical subject. I'm so glad that I had a chance to read The Suffragette Scandal by Courtney Milan.  This historical romance is causing me to revise my Romance Top Ten of All Time list.  I should have redone it when I read the Jewish Regency Miss Jacobson's Journey by Carola Dunn in 2016 (which I reviewed here) but I completely forgot.  This means that the two titles at the bottom of my top ten fall off the list leaving The Black Knave by Patricia Potter, a Scottish version of The Scarlet Pimpernel, rounding out the top ten. 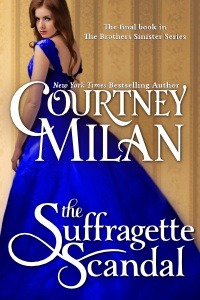 The Suffragette Scandal was such fun!  The heroine of this romance, Frederica Marshall, known to her friends as Free, is the owner/editor of a woman's newspaper in England in 1877.    One of my favorite moments in the book is when she tells the hero Edward Clark that if he ever needs an exclamation point, he should come to see her because she has a whole box of them.

It's often said that Jane Eyre is the grandmother of historical romance, but I think that The Suffragette Scandal is directly descended from Shakespeare's Much Ado About Nothing where Beatrice and Benedick have some really great dialogue exchanges.  I was thinking of Benedick calling Beatrice "my lady disdain" while I read this book.  Free could easily be a second "my lady disdain".   Her agile tongue can outwit all the other characters.

Aside from the dialogue, there's also a dramatic plot with threats to the newspaper, arrests at a suffragette rally, blackmail and forgery.  Free's background is amazing because it includes all the risks she took to publish exposés of institutions and businesses that were harming women.

Edward, the hero, is unconventional because he rejects the class driven values of Victorian society.  This makes him an outcast from his aristocratic family.  His life has been a hard one, but he's a survivor with many talents.  I loved him almost as much as Free.

In the Author's Note, Courtney Milan reveals what I suspected about the inspiration of her feminist heroine.  She is modeled on Nellie Bly, the 19th century American investigative reporter.  I've linked a Biography.com article about her life.  The image of her below is a public domain photo from Wikipedia. 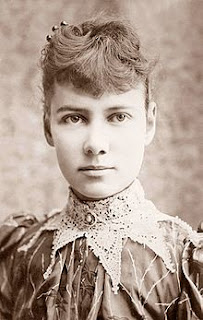 Those who say that historical romances which contain feminist heroines are all inauthentic are wrong.  Nellie Bly really existed.  There were suffragettes.  Romance writers can draw on a rich heritage of strong women throughout history.   I give The Suffragette Scandal high marks for being a feminist romance that is hugely entertaining.