The Mazarinette and the Musketeer-- Lesbian Swordswomen in Historical Adventure Novelette

This is a review of a book I read at the end of February and didn't have a chance to review in that short month.

So I came to a point when I really wanted ESCAPISM.  The news was terrifying, and the last book I read was so dispiriting that I didn't want to promote it by putting my review on a blog.  Fortunately, I had recently downloaded a free book from the author's website that was just the thing I needed. It was The Mazarinette and the Musketeer by Heather Rose Jones.  Jones says on her website that she wrote it in response to  a challenge to create a musketeer story containing only female characters.  I just love sword wielding women. 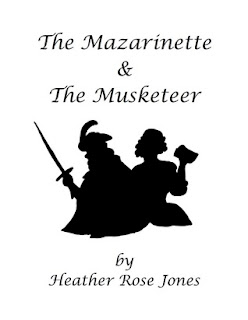 As a fan of Alexandre Dumas' musketeer novels, I already figured out that the Mazarinette must be one of the seven actual nieces of a real historical personage, the powerful minister of Louis XIII and Louis XIV, Cardinal Mazarin.  See their Wikipedia article  for further information.   Jones says in her historical notes that the Mazarinettes really did wear the uniforms of their uncle's musketeers. The Mazarinette in this novelette was Hortense Mancini.  I have copied a public domain painting of Hortense from her own Wikipedia article below. 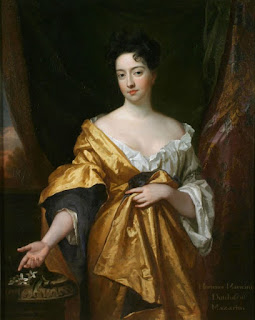 There were other real women among the characters in The Mazarinette and the Musketeer.  It does seem likely that Anne Lennard, Countess of Sussex, did have a lesbian relationship with Hortense Mancini as portrayed in Jones' tale.  Julie d'Aubigny, who appears in The Mazarinette and the Musketeer as a teenager, was the subject of a number of fictional accounts about her during her lifetime.  It's difficult to know what's true and what isn't.   She was supposed to have traveled with her fencing master doing sword fighting exhibitions.  Finally,  Aphra Behn  was the first woman to have earned her living writing plays.  She also really was a spy for King Charles II of England as shown by Jones in this novelette.  She's one of my favorite historical personages and I find it impossible to pass up a book that contains her as a character.

The Mazarinette and the Musketeer was as entertaining as I expected with lots of sword fights and women disguised as men. I thought that the female characters were all delightful. This is my idea of a fun read.
Posted by Shomeret at 3:02 PM