Publicist Wiley Saichek asked me about reviewing crime thriller Sinister Sisterhood by Jane Badrock when I told him I'd posted my review of  my last read for this blog, Ambush.  He said that it would contain the strong women characters that I wanted to see when I read for Flying High Reviews. So I accepted the review copy that he sent me. 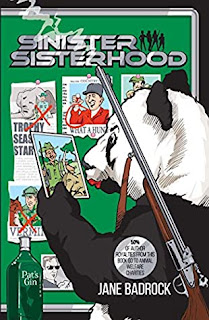 Wiley was definitely on the money when he said that there would be strong women in Sinister Sisterhood.  I was very pleased with some of these characters.
Sinister Sisterhood centers on an employment agency named Elle's Belles.  Owner Elle Scarlett donates part of her profits to organizations that help animals.  She became committed to animals due to the influence of her Aunt Pat who lives near a tiger sanctuary in India and volunteers there.  I loved Aunt Pat.
Another favorite of mine was the professional cleaner Chloe May Chopra who could clean absolutely anything.   You might call her a ninja cleaner if a ninja had cleaning skills.  She also has what might be considered a paranormal power if this were a fantasy novel.  Since it isn't, let's say that her intuition is very well developed.  Some readers might consider Chloe improbable, but I loved seeing a woman who cleans rooms in hotels becoming a major hero.
Elle's Belles wander into dangerous territory.  Women are trafficked, and there is a conspiracy to bomb hotels, in addition to their animal activist activities of investigating the hunting of endangered animals and the smuggling of their body parts. Buckle your seat belts, readers. It gets rather wild out there.
Yet it's also fun.   There are some great lines.  Author Jane Badrock must have an advanced degree in witty description.  During a flashback dealing with the background of the Elle's Belles computer expert we learn that she "took to Chicago the way Al Capone took to tax evasion".
If the reference to Al Capone leaves you with the impression that some of these woman characters aren't exactly girl scouts, you'd be right.  There are those who skate over the border between the law abiding citizen and the criminal on a regular basis.  There are also those whose ideas of ethics are very situational.  Badrock likes the idea of her heroines being badass.  Her philosophy is that "women can be as capable and as horrible as men".  I wouldn't have said that I'd be up for that before I read Sinister Sisterhood, but Badrock made me like it by always being entertaining.