The Choice : A Journalist Heroine in a Jewish Romance

I haven't been posting much to Flying High Reviews  because the strong female protagonists that are my focus in this blog tend to be few and far between.   In fact, all the books I've reviewed so far in 2022 were fiction with male protagonists or were non-fiction.  So I've reviewed them on my general blog Shomeret: Masked Reviewer or posted about them more briefly on Goodreads.    Author Maggie Anton sent me an advance copy of The Choice for review. 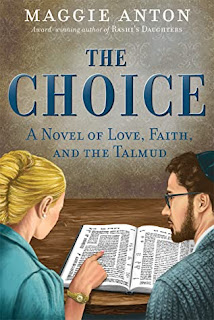 The Choice takes place in the 1950's.  The attitudes were quite different from contemporary mores.  That's why the main female character, Hannah Eisen, was being scandalous when she removed her gloves in a man's presence.

Back in 2014, I participated in a blog tour for  Anton's novel Enchantress.  That blog tour post included an interview with the author.  It was the last time I reviewed a novel by Maggie Anton on this blog. You can find what I had to say about Enchantress here.

Apparently, Maggie Anton found it necessary to mention in her Author's Note for The Choice that she didn't get permission from the Potok estate.  Chaim Potok's The Chosen is very far in my rear view mirror.   So the issue of similarity between the two titles didn't occur to me when I was reading The Choice.  I also found more than a hundred and fifty books using The Choice as a title on Goodreads. It's really pretty generic.

The male protagonist, Rabbi Nathan Mandel, discovered that women had been emigrating to what was then Palestine for 900 years.  He also learned that 900 years ago women were counted as part of the minimum number for a prayer service (known as a minyan), and that they read aloud from the Torah in synagogues.  Since Orthodox Jews like Rabbi Mandel don't currently count women for a minyan or allow women to read aloud from the Torah during a prayer service, this was an amazing discovery for him.  I also thought this was an important revelation about the historical status of women within Judaism.

There is discussion of child sexual abuse in the Orthodox community in The Choice.  It dealt with someone who was molesting boys in Orthodox  Jewish schools.  We learn that this wasn't just a current problem.  One Lubavitcher Rebbe  had been sexually abused by a mentor beginning in his boyhood and continuing long-term until he got married.  That rebbe had become a patient of Sigmund Freud to deal with his trauma.

Hannah, who was a journalist, had written an article about a molester at the ultra-Orthodox girls' school which had been suppressed.  She showed her article to Nathan telling him that an Orthodox clinical psychologist that they knew, who was faced with all these current sexual abuse victims, would find it interesting.  Hannah later wrote an article about the same molester abusing Orthodox boys.  Her editor didn't want to publish it, but he did want to circulate it because it included the information about the Jewish clinical psychologist who could help survivors of abuse.  He had agreed to have his name mentioned in the article.

The relationship between Hannah and Nathan began with Nathan secretly teaching Talmud to Hannah.  Teaching women Talmud wasn't allowed by Jewish law.  Nathan compared his teaching her Talmud to the activities of  19th century anti-slavery abolitionists.  I thought that this implied that Nathan believed women should be taught Talmud and that one day it would be permitted.

Hannah's mother asked if Nathan and his father had been at the 1949 Peekskill Riots.  They had been there.  Racists protesting a Paul Robeson concert had started the violent disturbance.  I looked up the Peekskill riots and found a Wikipedia article here.  I also found some reminiscences about his 1949 Peekskilll experiences by Howard Fast here . They were quite intense.

An important issue for Hannah and other Orthodox women was filthy poorly maintained mikvahs.  These are Jewish ritual bathing facilities.  Women were expected to visit mikvahs for purification after menstruation, and before intimacy with their husbands.  The condition of many mikvahs contravened their purpose.

I wasn't mistaken in my impression that a relationship between the male and female protagonists was central to The Choice. I will allow readers to find out the specifics of how their relationship grew, and what it became.