This is a fictional novel with fictional characters based on a real group of women, the 6888th African American Battalion of the Women's Army Corps. During world II, women gained their own army and because segregation was in effect in those days, African American women had their own battalion. 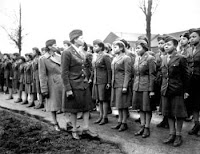 The story of these women is told from the viewpoint of Mare, who relates this tale while taking a road trip with her grandchildren one summer. In between rest stops, hotels, restaurants, teaching fifteen year old Octavia to drive, and arguing about music with seventeen year old Tali, Mare tells about leaving an unhappy home in 1940s Alabama to join the Women's Army Corps and enable a man to go off and fight. (It should be noted that during this time, women joining the Army was frowned upon by mainstream society. They were perceived as "mannish girls with unnatural desires" so our heroine dealt with prejudice of all kinds.) The first half of the story is boot camp. There is marching, beds tight enough to bounce quarters off of, more marching, and gas mask training.

From training, the 6888th goes to England where they have 6 airplane hangars full of mail to sort and get to its destination. These ladies were in charge of "soldier's morale." If troops didn't get their mail, their morale went down. What these women did was very important. Mare does not limit her narrative to military stuff tho. She also talks about the way English people treat the African Americans compared to the way Americans treat them. She talks about learning to dance and having her first drink. She also remembers taking cover during air raids. After England, the Battalion goes to France and they participate in a parade honoring Joan of Arc. This really did happen in real life. 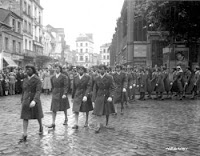 I really enjoyed this. I highly recommend it to all ages and all races. It is very important that these women receive recognition and that their contribution never be forgot. I could have done without the modern day parts of this book, but they didn't detract from my enjoyment.

Favorite quote: My nails might not be nice enough for polite folk, and my face might not be clean, but I earned my place in this man's army."

I got this book from the library.