In order to make sure I would get a mystery read in September, I got one picked out even before I'd arrived at the halfway point. It was Shutter by Ramona Emerson.  The copy I'm reviewing is a library book.  The protagonist is a photographer which isn't all that unusual.  I've reviewed several books with photographer protagonists -- most recently Michael Angelo & the Stone Mistress by Steve Moretti.  Yet this is my first female Navajo photographer protagonist. 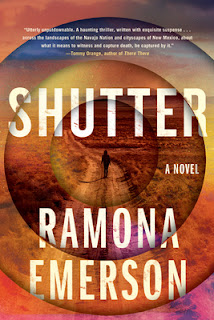 As the book opens, Navajo Rita Todacheene is a forensic photographer.  This means that she photographs crime scenes. Yet she also sees spirits which isn't a trait that would be considered compatible with professionalism in most work environments.  Needless to say, Rita must be careful not to reveal her paranormal gift  to officers in the Albuquerque PD.

Being paranormally gifted, isn't the only way that Rita's job is problematic. I also knew that the Navajo avoid mentioning the dead or even the names of dead relatives.  So it seemed to me that Rita's job was extremely incompatible with her culture.

The issue of the Navajo belief that the spirits of the dead (called "chindi" in mysteries by Tony Hillerman) could contaminate them, arose when Grandma took Rita to a church where ghosts were lingering.  I wondered why Navajo spirits of the dead would linger if they believed they were contaminating people that they loved.  Her grandfather's spirit worried that inimical spirits could make Rita crazy.

I was interested in the fact that Rita's neighbor was evidently a curandera.  Curandismo is a a Mexican healing tradition. She rubbed Rita with an egg, then she cracked the egg into a glass of water and told Rita to put the egg in the glass of water under her bed.  "Whoever has their eye on you will let you go," said the curandera.  There were also jars to put in each corner of the room.  Rita thought it was superstition.  I think that Rita's lack of belief in the measures that Rita's neighbor was taking to protect Rita would undermine their efficacy.

Rita learned Police Lieutenant Garcia was behind most of the local distribution of meth. This was a major revelation.  I wondered if Garcia did that because Latinos were being discriminated against when it came to advancement in the police department.

There is a positive resolution to the book from a law enforcement perspective.  I decided to give Shutter a B+.