Paths For The Divergent

A curandera was mentioned in my recent review of  the mystery Shutter which centered on a Navajo woman photographer. (See my review of  Shutter here .)  I am now reviewing a book in which a curandera is a major point of view character.  The title is Witches and the author is Brenda Lozano. 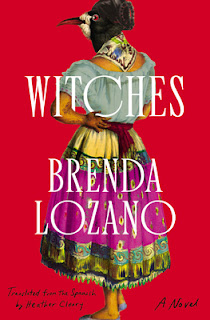 It seems to me that Witches is a somewhat misleading title.   Curanderas are more specialized than witches.  Witches may perform all sorts of magic.  The magic of a curandera is focused on healing.  She also practices a particular Mexican tradition of healing that may have similarities to magical healing practices in other cultures, yet there are also important differences.  I have never believed in erasing unique aspects that occur in the variety of cultures on our planet.  We can then lose wisdom, and are poorer because of it.

Wisdom is not the same as what we learn in school.  I believe that the characters of  Witches demonstrate that this is true.  Yet there is value in schooling. Literacy can broaden your knowledge of cultures other than your own.  The amazingly gifted healer Feliciana was illiterate.  She learned about peoples from outside Mexico when they traveled to meet her.  This normally wouldn't have happened to a woman who grew up in Feliciana's village.  She would have been quite culturally isolated.

If the village had been less isolated, another divergent character could have found connections with others who were like her.   Paloma was born with the name Gaspar and was raised as a male in a family tradition of men who were curanderos.  Curanderos are paranormal healers.   Over time Gaspar began to exhibit the female traits that were natural to her.  She was attacked for becoming who she was meant to be.  In Mexico she was considered a muxe, which is a third gender.  She called herself Paloma.  Few people in this village could accept Paloma, even though Paloma was the one who taught Feliciana who  became a powerful curandera.

We learn that Feliciana and her sister Francisca first began to eat the hallucinogenic mushrooms that were tools for healing because there wasn't enough food.  It's sad that a family that had been healers for generations were so impoverished.

In the next generation of what had been a family of curanderos and curanderas, the divergent one was Leandra.  Leandra was a rebel who started fires and was kicked out of schools.   She told her sister Zoe that she had gotten married to a girl.  She asked Zoe not to tell their parents because she hadn't invited them to the wedding.  I suspect her parents wouldn't have come if they had been invited.  Leandra doesn't seem to have any awareness of the existence of homophobia.

Professionally, Leandra wanted to be an art photographer whose work is exhibited in galleries.  The first time this happened, Leandra had three photos chosen for a group show.  Leandra's work attracted the interest of a collector who specialized in Latin American woman artists.

I liked this book dealing with unconventional people very much and decided to give it a B+ which is four stars on Goodreads.