Once upon a time, there was the United States Coast Guard and there was Life Saving Stations. In 1915, the two parties combined. One of those Life Saving Stations was manned by an all African American crew. Those guys went above and beyond the call of duty. The location was Pea Island. (North Carolina) This book is not specifically about any of those guys in particular, but loosely based on the circumstances. It is about an all African American crew and one girl, raised by the seven men.

The cook got a girl pregnant. The girl died giving birth. The result is Sunday. Sunday grows up a tomboy, runs naked thru the waves, mans her own fishing boat, and has spunk to spare. She becomes a "healer" of sorts and a midwife. She makes both good and bad choices. I applauded when she shot a man in gonads to pay him back for raping her, but I shook my head in dismay when she began harboring German POW. This is during World War II, mind you... Also, this story takes place in the 1940s, not the early 1800s, I would think one would have been required to report the finding of two dead soldier's bodies...?

It's a good story full of characters readers won't quickly forget. I love the fact that this is little known piece of history. I never knew about these Life Saving guys till I found this book and I enjoyed the look at what their lives were like and the feats they accomplished. The World War II stuff with surprise submarines popping up and gold bars being burried is another bonus.

The only reason, I don't give this book a five is it felt rather rushed. Sometimes from one paragraph to another, three months would pass. This is one of those rare novels I think could have been longer and gave us even more detail about Sunday's thoughts and feelings and life.

Captain Richard Etheridge became the first African-American to command a Life-Saving station when the Service appointed him as the keeper of the Pea Island Life-Saving Station in North Carolina in 1880. The Revenue Cutter Service officer who recommended his appointment, First Lieutenant Charles F. Shoemaker, noted that Etheridge was "one of the best surfmen on this part of the coast of North Carolina." Soon after Etheridge's appointment, the station burned down. Determined to execute his duties with expert commitment, Etheridge supervised the construction of a new station on the original site. He also developed rigorous lifesaving drills that enabled his crew to tackle all lifesaving tasks. His station earned the reputation of "one of the tautest on the Carolina Coast," with its keeper well-known as one of the most courageous and ingenious lifesavers in the Service. 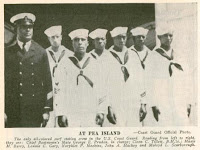 This information and pictures were found on the following website and worth a look see:

Pea Island today is a wildlife refuge and due to hurricanes and land changing is no longer a separate island.