Curveball: The Remarkable Story of Toni Stone by Martha Ackmann

Tho born as Marcenia Stone, by the time she was fourteen, this woman was known as Tomboy Stone. Why? She loved to run and play baseball. In the 1930s, this was unusual behavior for a girl. Her parents even frowned upon Tomboy's extracuricular activities. Tomboy was on the verge of running away from home when the local priest realized her potential and convinced her parents to allow her to play on the church baseball team. This was only the beginning... 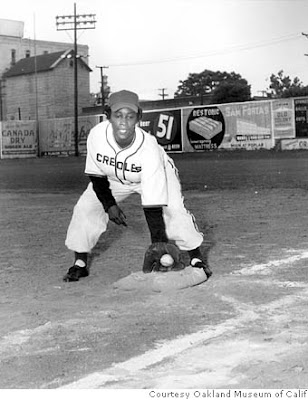 As a young woman later in life, Tomboy armed herself with a 25 cent baseball glove from Goodwill and a pair of shoes that were a gift from Evard "Gabby" Street and after traveling for a while with a barnstorming team, she hit San Francisco and reinvented herself. Toni Stone was born. Toni Stone went from barnstorming teams to semi pro teams to the pro Negro League. She played on the SF Sea Lions, the New Orleans Creoles, and the Indianapolis Clowns and other teams. She propped open the door for other women to enter, women like Mamie Johnson and Connie Morgan.

Immersed with Toni's story is background information on what was going on in the Civil Rights movement at that time. It's important to remember that Toni Stone was not only in the fight for women's rights and equality, but also for African Amercian rights. During this time, lynching still occurred and hate ran rampant, especially in the "Jim Crow" south as they refer to it. And Toni's teams had to play ball in some of these places. Toni Stone had to straighten her shoulders, put her chin up, and while hitting, catching, and at one point even being knocked out by a ball, she had to face hateful white crowds and listen to insults hurled her way. Discrimination did not stop with racist or chauvinistic crowds tho. Toni also faced harassment from her own teammates and at one point, even had to take a baseball bat to fellow team member's head to stop his sexual remarks. This gal did not turn tail and head home to make her husband biscuits that's for sure.

Other African American baseball pioneers are honored in this book, including Jackie Robinson and Satchel Paige.


This is a very good read and more entertaining than most biographies. There was too much detail about other people tho, and not just people involved in baseball. Example: Louis Armstrong and the Zulu parade. I couldn't care less. Also, the book focuses on other baseball players quite often. Whereas I wasn't interested in some of these players, I think baseball fanatics will be overjoyed with the details. There were simply some parts that are more for "lovers of the game." This reader has no real interest in baseball, just strong women in history.

Toni Stone was involved with baseball in some way until she turned 65. She was honored by the Baseball Hall of Fame in 1991. She passed away in 1996.

I received this book from the publisher. I am not being reimbursed for my review. I just received a book that I requested upon discovering it on Shelf Awareness. The subject matter intrigued me enough that I HAD TO READ IT. So, thank you, Lawrence Hill Books.