Den Of Wolves by Luke Devenish 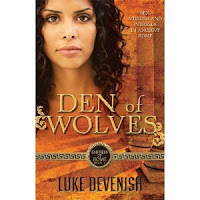 I'm fond of saying..."If you are going to entertain me for 4 days (aka 600 pages), you better grab me from the get go." I do have a very short attention span and I hate extremely lengthy paragraphs describing dresses and trees and clouds. (YAWN) I will say one thing in this book's favor. It did grab me from the get go even tho I thought it was kind of weird.

Why weird? The narrator is 100 years old. (He also narrates book 2 so I guess he is about 115 or 120 at that point.) That's strange itself, but the man/woman and the little oracle boy that kills birds and reads their entails... VERY WEIRD. Nevertheless, I was hooked because the book was different and the heroine, Livia Drusilla, tho unlikeable, is strong.

Livia marries Tiberius Nero. He is not the one she really sees herself being with tho. She aspires much higher. She aspires to marry Octavian, Julius Caesar's nephew, the first emperor. Thanks to a very sinister slave, Livia attains her goal and seduces Octavian.

She becomes Empress. I gotta mention at this point, the sexual depravity was there but no real details. You KNOW they are doing the nasty, but the author doesn't go for paragraphs about it. However, Martina, the sinister slave seems to bring up the subject of breasts every time she appears in the story. Cleopatra, upon saying goodbye to her literally takes a book out and starts squeezing it. Livia is seduced by Martina's tattooed breasts and falls on her knees to um.. err.. play with them. Very werid, this Martina and breasts.

I said, up until this point, the sexual depravity was minimal.. However, upon reaching page 166, it went to new heights. Livia announces to Tiberius that she is carrying Octavian's child and all that.. While he is on the floor begging her not to leave him, she throws hot coals on his body and does the following: "She raised her long, white stola from the coals and stood astride him, giving him his final view of her privates. Then she let go a hot stream of urine, dousing his face and hair with it until she had put out the last of the embers."

And... well.. at that point, I became rather frightened of what may yet be coming. (Copulating dwarves or something?) I also realized that 170 pages into the novel, I didn't like or care about a single character. I bailed.

I bought this book from Amazon and if anyone else has the guts to try it, I will be posting it as one of the choices on my Pick A Book giveaway for September. Be watching for it.
Posted by Tara at 10:41 PM