Coincidentally, I happened to have two historical fiction books about Catherine the Great on hand when TCM aired a classic movie about her. Thus, I decided to compare all three for what I hope is a fun blog post.

What it's about: The last half of Empress Elizabeth's reign and then the first bit of Catherine the Great's. Told in first person POV from the viewpoint of a lady spy who originally spies for Elizabeth and later becomes a friend to Catherine. Chronicles Catherine's mistreatment at Elizabeth's hands, the loss of her children either to miscarriage or to the Empress, her affairs with a Sergei and a Polish man and the Orlov brother, her discord with Peter, and her conspiracy to overthrow him.


Liked: The narrative being from a lady spy. Terrific idea!! I learned so much about Catherine and this novel, unlike some others, portrays her as a woman that readers can relate to, understand, and sympathize with. I also liked reading about Barbara grappling with feelings of guilt. In one part, she has a dream about Madame Kluge, a woman she got exiled from court. She dreams she is in a carriage and offers Madame a ride. Madame says, "I don't want to go where you are going." This particular scene gave me goosebumps, had me wondering, "where is she going?" It gave the book an ominous feel that worked wonderfully considering all that occurs.


Didn't Like: Starts to drone on and on at times. Bit too overly descriptive. Had me hooked from the get go but then began to lose my interest once Barbara marries. During the period she was away from court, the book grew dull as Barbara's life was simply not interesting without the court intrigue or Catherine. Also feel I missed something.. when did Barbara go from loathing her husband to loving him a little? By the time the man left for war, I felt there was something there and I never saw the change. By page 335, I was utterly bored. I feel the book is unnecessarily long for what it contains. It ends with Catherine obtaining power. After this woman became empress, she proceeded to take over the world. Does that not bear mentioning? Throughout this entire novel, unfortunately, she was just a brood mare, a conniving brood mare, but a brood mare.


My star rating: Three. I liked it, but it had some quibbles.

Second, the movie, The Scarlet Empress, 1934 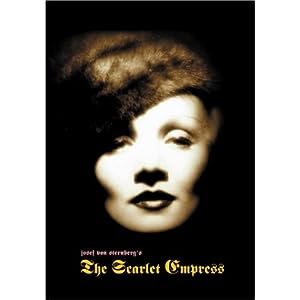 What it's about: A young and innocent Sophie travels to Russia, is treated like crap by Empress Elizabeth, loses her name and religion, falls in love with Alexei   asap, beds a random guard in the dark of night, and gradually steals her husband's throne.


Didn't Like: 1. Alexei.. that actor is butt ugly. I mean, seriously, if my dog looked like him I would shave its butt and make it walk backwards. That ugly. And just who the heck is he? I didn't find him when researching to find out truth from fiction. 2. Peter the III's character was way over exaggerated. That horrid smile was ridiculous. 3. This movie claimed in the beginning that it was based on Catherine's diary. I seriously doubt it. I find the events of this movie to be so preposterous at times, I question its historical accuracy. I know Peter was a nut, but I doubt he just randomly shot at soldiers out his windows. And Catherine did take lovers, but a random guard on night duty? 4. Some scenes were horribly long, the wedding, the dinner, the horses riding through towards the end...

I would like to note a major difference here between this movie and the book above: In Winter Palace, Empress Elizabeth is very fond of Catherine in the beginning. In this movie, it's hatred from the get go. Elizabeth treats her like a brood mare. However, once again, everything ends with her obtaining power. :(


Third, is the book The Rebel Princess by Evelyn Anthony, 1953

What it's about: Basically the same stuff that I mentioned above in Winter Palace, minus 200 some pages and minus the lady spy narrative. Also, though the major story line is the same, there are minor differences in plot, such as Catherine seeking permission for her second love affair. This one is told in the third person and doesn't go on and on and on. It also skips the six years that Catherine is held in captivity with her husband while Elizabeth awaits an heir. Really, a good idea as that stuff was so boring in the WP. This book also evoked in me some deeper thoughts: You would think that Peter and Catherine would have hit it off as both came from very similar childhoods. Peter was greatly oppressed by Elizabeth and Catherine was beat down emotionally by her mother.  I also noticed that one thing all three of these books/movie combo have in common is: Princess Johanna, Catherine's mother is a mega beeyotch.

What I liked: We get the whole story without the drawn out details. This book does not take an entire paragraph of colorful words to tell me the Empress loves theater or whatever. Catherine is a sympathetic figure in this. The WP had too many characters at times and they were often called by numerous names. I grew very confused. This book is much simpler and easier to follow along.

The passionate scene between Catherine and Orlov consisted of few words, but impacted me greatly: "With shaking hands Catherine tried to loose the ruby necklace which had been pressed into her skin in that wild encounter in the corridor; for a moment she could find no words for the tumult of emotions which possessed her. Accept his protection, live however briefly in the arms of a man who had stormed and taken her with the ruthless abandon of a marauding Cossack..."


Also loved the part where Catherine leads her troops, commands their respect, and dons male attire. It was a powerful scene. I got goosebumps.


What I didn't like: Again, the story ends just after Catherine takes the throne. However, this is the first of a trilogy and thus, I won't hold this minor quibble against the book. The story does continue, I just have to find the now out of print book that is next.


My star rating: Five. Really liked it. And thus, it wins this comparison. Hands down. And I found this one in a little book store in Montana.