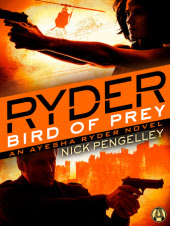 According to the last words of a dying man, the Maltese Falcon was no mere legend: The fabulously jeweled golden bird really existed—still exists, in fact. And Ayesha Ryder is hot on its trail. Rumor says the Falcon conceals clues to the burial place of Harold II, the conquered Anglo-Saxon King of England—and to an artifact of astonishing significance that few besides Ryder would understand.

Hunted by Scotland Yard, MI5, and those who seek the Falcon to break up the United Kingdom, Ryder joins forces with Joram Tate, a mysterious librarian with a reputation for turning up things that don’t want to be found. Soon Ryder and her handsome, erudite new companion are venturing through lost tombs and ancient abbeys, following a trail left ages ago by the Knights Templar.

Ryder knows she’s close to a game-changing secret, hidden for a thousand years beneath an English castle. But with ruthless killers waiting in the wings, Ryder must go medieval—to defend her life, her country, and the world as we know it.

What appealed to me about this book was that it had a kick ass heroine. Ryder was a great character and I enjoyed following her through this tale as she finds the Maltese Bird and the mystery around it. When I started this book, I felt like I was mid-story in something. The characters already knew one another (or so it felt to me as a reader for the first time in this series) and so much had already happened. It was then I discovered this was book 3 in a series and it doesn't feel as though I could read this one as a stand alone. I still did read this because I found the plot interesting and the writing good, but to anyone reading this review, make sure you read the first two books or you'll find yourself very lost in the beginning.

There are several point of views in this book with different angles. It took me a good few chapters before I had a grasp on each character and looked forward to their next section. It was nice to see how people reacted to this Ryder did to them in the book.

Ayesha was a character I enjoyed getting to know. I felt like the author did a good job with character development and letting us learn new things about them as the story went on, instead of a lot of back story in the beginning.

Overall, I enjoyed this story. I did have times my mind went off wandering and thinking about my daily activities. This isn't a genre I usually read, so it was nice stepping out of my comfort zone.

Nick Pengelley is the author of the political thrillers Ryder, Ryder: American Treasure, and Ryder: Bird of Prey. Australian by birth, he’s had careers in Australia, Canada, and the United Kingdom as a law professor, legal consultant, and analyst on Middle East politics, which is his passion. Pengelley lives in Toronto with his family.

Monday, May 4th: A Fantastical Librarian

Wednesday, May 6th: My Book Retreat

Monday, May 18th: Reading to Distraction

Monday, May 18th: Queen of All She Reads

Wednesday, May 20th: Dwell in Possibility