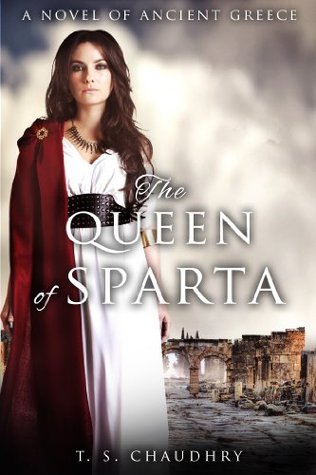 Author T.S. Chaudhry offers a new spin on Spartan history in his novel, THE QUEEN OF SPARTA. In the book, Queen Gorgo, the wife of the courageous Spartan leader, Leonidas, surreptitiously organizes the Greek resistance against the invasion of the mighty Persian king, Xerxes, and his massive army. Although founded on the writings of historian, Herodotus, Chaudhry’s revision of the 480 B.C. invasion challenges readers to imagine the brilliant and politically savvy Queen Gorgo as the Spartan leader who wielded her power with stealth and cunning to end the Persian occupation of Greece.

Gorgo devises a strategy using espionage and diplomacy, in addition to Sparta’s military might, to defeat the Persians and drive them out of Greece. During the last battle of the war, Prince Sherzada, a Saka, is captured while fighting on the Persian side. He is imprisoned by Gorgo, who has vowed to kill him. However, an unexpected alliance blooms between Gorgo and Sherzada, based on common perceptions and a shared dark secret. As allies, the queen and prince face new dangers from within Sparta that threaten the safety of Gorgo and her young son, the king.

As the story progresses, Queen Gorgo must choose between confronting the reactionary forces within Sparta directly or saving her life and the life of her child.

I do not like signing up for book tours, only to dislike the book, especially when I'm sent a paperback copy. Unfortunately, I did not like this one much...for a couple of reasons. As a result, this review is no longer part of the tour and I'm posting it on my own time.

-The blurb makes it sound like a novel about Gorgo, this amazing warrior queen. And she is amazing, what bits reside on her. Truth is, the story isn't about her but this never-ending battle. It's just battle after battle after battle, war strategy after strategy. I quickly grew bored and frustrated. I'm not into battle details.
-The parts featuring the awesome Gorgo time jump all over the place. The book starts in one setting, goes back a year (the main setting for the book), then it goes back three years, then back to the year before the beginning, then back ten months, then back to the year before and then back 11 years...
--I didn't like and couldn't care less about the Persian man's POV- Sherzada. That is all battle stuff.
--LOTS of telling, very little showing.

Conclusion: This isn't a novel about Gorgo, the amazing warrior queen, but a summary of battles between Spartans and Persians.

I'm thankful for the chance to read this though and sorry I didn't like it more.