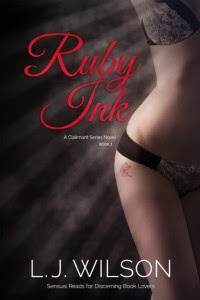 Ruby Ink wasn't what I expected. The cover made me think this book was going to be my typical romance story I like to read. However, there was much more to this book and I was pleasantly surprised.

Aaron and Ruby were each others first loves until Aaron goes to prison for attempting to kill her father. You see, Aaron got involved with the wrong crowd and became a drug trafficker. When he's released from prison 7 years later, he still long for Ruby. The woman he'll never get over.

For much of the story, Ruby isn't in it. There are other mysteries and suspenseful plots unfolding, but without giving too much away, when Ruby does enter the picture again--sparks fly. She may hate him for attempting to kill her father, but she can't deny how she feels about him.

The book ends, resolving Ruby and Aaron's issue, but does have a but of a cliffhanger, which is fine by me. It let's me know this author will be writing more of this story and I can't wait to see what happens next. There are 5 siblings, so I am assuming that each one will be getting their own book. I can't wait to read the next installment.

Ruby Ink is the first book in this sensual romance series—journeys of intrigue, seduction, and satisfying storytelling. The Clairmont siblings, known as the "Tribe of Five" —Alec, Aaron, Honor, Jake and Troy—are complex characters whose individual stories and intricate love lives drive these dynamic new novels.

In Ruby Ink, Aaron Clairmont has been granted an early parole. He returns home to Nickel Springs and finds employment at Abstract Enchantment, a trendy new inn. But Aaron’s mind can’t let go of its predecessor, the vintage Rose Arch Inn, the setting for his passionate love affair with Ruby Vasquez. Ruby—the girl Aaron lost after his secret underworld life unraveled, shocking everyone who thought they knew him.

Freedom comes fast at Aaron—a family desperate to reconnect, an employer cast as his savior, and the steamy memories he can’t escape. Just as Aaron surrenders to starting anew, he realizes the diabolical trap he’s been lured into—a fresh hell that makes prison look like a country club. Lives are at stake, his family and Ruby’s. Ruby Vasquez—the woman Aaron never thought he’d see again. The one destined to collide with his future.

GIVEAWAY
Thanks to TLC Book Tours, there are two copies up for grabs. U.S. or Canada only, your choice of paperback or ebook. Leave a comment on this review and be sure to include your email address to be considered. You have one week to enter. Winners will be notified via email and have 48 hours to respond or a new winner will be chosen.