Cafe of the Hungry Ghosts

Why am I reading a book called Cafe of the Hungry Ghosts?  Am I getting into the Halloween spirit early?  Such a title may lead readers to wonder what you feed a hungry ghost.  I have an answer to that question.  You feed them whatever they want.  This is actually a serious answer.  I've encountered the term "hungry ghost" in a Chinese cultural context.  It means ancestors who have been ignored.  No family members have established altars or made offerings to those ancestors.  In Chinese tradition, this shows tremendous disrespect for ancestors.

Getting back to the book, the title is somewhat inaccurate.  Although there is definitely one hungry ghost in the plot, there is no indication of any others.  The single hungry ghost doesn't make an appearance at a cafe.  There were no invisible hands preparing lattes that hadn't been ordered.  If that's what you were expecting, you must look elsewhere for a ghost ridden cafe.

I first encountered Cafe of the Hungry Ghosts on Goodreads where author Teri J. Dluznieski was offering free copies in return for reviews.  I promised one in September, and I'm managing to do that in September's final week. 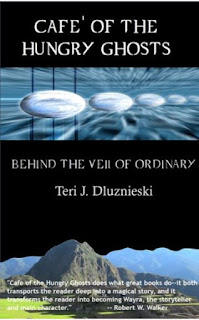 Cafe of the Hungry Ghosts is really about Wayra, a college student who was brought up partly in Peru and partly in Vermont.   This hybrid childhood is due to her parents making differing choices about where they wanted to live.  In Peru her mother had given her some training in her family's tradition of shamanic healing.   She is currently living with her father in Vermont where she's going to college, performing healing  ceremonies for illegal immigrants who can't see medical doctors, is a mentor to a brilliant  young girl and oh yes, she does work at a cafe.

Wayra is not portrayed as one of those idealized characters who juggles her numerous responsibilities perfectly and should be nominated for sainthood.  On the contrary,  she can't handle it all as well as she hoped, she has nightmares and makes errors in judgment.  I found Wayra sympathetic because I know what it's like to feel overwhelmed.

I was interested in the content about healing .  Wayra  gives a woman recovering from flu an herb that is a mainstay of the Peruvian diet.  It's called maca .  My link is to an illuminating article about it on WebMD.  I'd never heard of it before and it looks like it can be useful for a variety of purposes.

I was also very interested in the description of Andean shamanism and the folklore on which it's based.   I have always known that it's unwise to assume that a concept from a tradition that I haven't studied is identical to one in other traditions that I have studied.  Yet I did assume that the Andean concept of the "bubble" was the same thing as an aura.  When I started reading Dluznieski's non-fiction book on shamanism, Dancing Your Bubble, I realized my error.  The Andean idea of  the "bubble" has some things in common with an aura, but is much more complex.  It's important to realize that while there are similarities between traditions, there are also unique elements that can be significant.

The extremely controversial issue of illegal immigration is another important focus in this novel.  Dluznieski gives opponents of a path to citizenship for illegals some food for thought.

There were brief mentions of phenomena in Cafe of the Hungry Ghosts that I wanted to know more about such as  Barefoot College, guerrilla gardening and Bowenwork .The information at the links I've provided are a good start for those who want to know more.

Although this book is a fascinating look at Wayra's life, the cliffhanger ending was very jarring.  There were a bunch of narrative threads left hanging.  Even when a book is the first volume in a series, I prefer some degree of resolution. This was my biggest problem with Cafe of the Hungry Ghosts and I consider it a serious one.