Run You Down: Dramatically Intense Sequel to Invisible City @juliadahl

I reviewed the debut mystery Invisible City by Julia Dahl on this blog.  It took place in the hasidic community of New York who call themselves haredi. I said in my review of the first book that I wasn't that impressed with the journalist protagonist Rebekah Roberts, and that I wished that I was reading the story of Aviva Kagan, Rebekah's mother.  Well, I got that wish.  The sequel, Run You Down, alternates between the perspectives of Rebekah and Aviva. 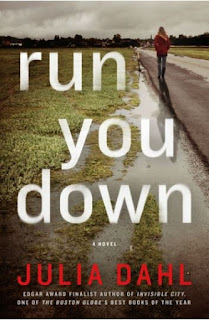 This book is full of tragedy, but you could almost call the murder that Rebekah is investigating a poignant footnote to the heart-rending story of Rebekah's uncle, Samuel Kagan.  Sam is the dramatic center of the book.  I was very sorry for Sam.   I understood that he was largely shaped by PTSD, and that his trauma motivated his behavior.  Yet at the same time, it was hard to view him as a sympathetic character because some of his actions were so shockingly unthinkable.

Aviva was an important character, but largely secondary within the plot.  Her self-punishing guilt kept her away from the people she cared about most.  Yet Aviva was really a victim of her upbringing.    As much as she tried to combat it, being a member of the haredi community was too much a part of her.

Dov Lowenstein, a disaffected ex-haredi who appears briefly in Run You Down, calls the haredi a cult.  This would explain why Aviva and others found it so difficult to leave.  What is the definition of a cult?  Neopagan author Isaac Bonewits developed a Cult Danger Evaluation Frame originally published in his book, Real Magic.  Its original purpose was to allow Neopagans to determine whether any particular religious group that they might come across was a dangerous cult.  If a group's  practices involves a high number of the characteristics that Bonewits listed, it's best to stay far away from it.  It is possible to conclude from what is written about the haredi in Julia Dahl's books that they are a cult.  Others might maintain that they preserve traditions, and are a source of social cohesion for their community.

I thought that Rebekah improved in this book, but she may be too vulnerable to be a successful journalist.  The ugliness of the crimes that she has investigated disturbs her very deeply.  At one point in this novel she reminds herself that being a reporter is what she aspired to do, but then comments "Maybe one day living my dream won't make me feel sick."

Run You Down is a powerful piece of fiction.  It also completes the Rebekah and Aviva character arc.  So if Julia Dahl continues with the series, she will need to find a new direction for Rebekah.  Perhaps additional professional training would be advisable for this character.