The Darkness Rolling by Win and Meredith Blevins

I read and reviewed the first Blevins' collaboration, Moonlight Water on my personal blog here.  I first encountered Yazzie Goldman, the fictional male protagonist of  The Darkness Rolling, in Moonlight Water.  Yazzie is part Navajo and part Jewish.  Although Moonlight Water was contemporary fiction, The Darkness Rolling is the first book in a series of historical mysteries that begin right after World War II.  During the war Yazzie received training in NCIS investigative techniques.  I thought that he had potential as a mystery detective.

The reason why I decided to review this book for Book Babe is because there's a rather prominent female character.  She is the real Hollywood star, Linda Darnell.  I knew virtually nothing about her before reading The Darkness Rolling.  After finishing it, I wanted to know a lot more. 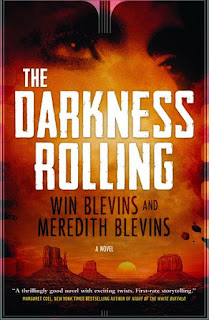 The Darkness Rolling is actually a crime thriller rather than a mystery. The perpetrator is revealed to readers early in the book.  The suspense arises from how he is caught and captured.

Yazzie Goldman is hired as part of the security team for Linda Darnell during the filming of a movie directed by John Ford in Monument Valley.  The movie's name is never mentioned in the book.  Based on internal clues and online information about Linda Darnell's career, I'd say that it has to be My Darling Clementine (1946) in which Darnell played a Mexican dancer.  I learned from this novel that Darnell was actually part-Cherokee.  This was confirmed by multiple web pages dealing with Linda Darnell.

This book could have been a standard thriller about a star being stalked. One of the reasons why it wasn't was because of Linda Darnell as portrayed by the Blevins.  She absolutely refused to be treated as a victim.  She was not going to be pitied or allow herself to be sidelined.

I do have to say that Yazzie's grandfather, Mose, was the most extraordinary character.  He had recently had a stroke before the novel began, and his speech was tremendously impaired.   Yet in a crisis he could surmount his medical condition with a toughness and resourcefulness that was nothing short of amazing.

There was some good Navajo cultural and historical content in this novel.  A reference to the Navajo chief Hoskininni led me to research him.  I learned that when the U.S. Army forcibly relocated the Navajo, Hoskininni led many Navajos into hiding where they remained until the Navajo were allowed to return.  I found a very colorful account of Hoskininni's life at Dine Biographies.

So I enjoyed The Darkness Rolling very much.  It was unexpected, and I loved a number of the characters.  I will definitely read the next in the series.