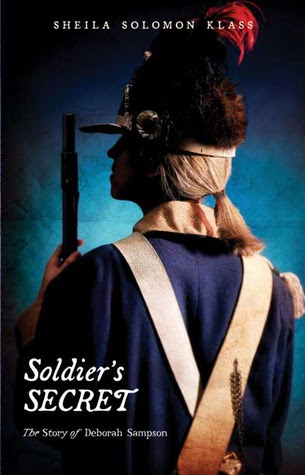 Deborah Sampson really existed. She was a Massachusetts gal who donned a pair of britches and fought in the Continental Army during the American Revolutionary war. This is a fictional account of her life, parts of it anyway.

The story tells a bit about Deborah's childhood. Her dad abandons her, her mother and siblings (or he got lost at sea... who knows for sure?) and Deborah's mother cannot afford to feed all the mouths left to her so off Deborah goes to be an identured servant for TEN years. This does somewhat parallel the Annie Oakley novel by this same author. However, Deborah doesn't find her way back home. Instead, she dons male attire and joins the Continental Army posing as a young man. 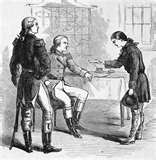 In the Army, Deborah (now known as Robert Shurtliff) developes a crush on Roger. They become quite close but when Roger finds out her secret, he may not react the way she hopes. They both find themselves imprisoned in Tory loyal farmhouse and at death's door. The ending finds Deborah exacting revenge on the Tory loving farmer and suffering a severe injury and fever herself. Plus, her secret is out...

Deborah Sampson really did join the Army and really did receive an honorable discharge in 1783. She really did receive two musket balls in the leg also. She later became the first woman lecturer in the United States. The book doesn't go that far tho. I liked it, but I must say it is def aimed at the much younger crowd, not necessarily young adult, but pre teen. There were some religious moments as well. Four stars because I HATED Roger. He being a fictional character, why was he made to be such a wimp????

Statue of Sampson outside the Sharon, Massachusetts public library

Great quote: "I never wanted to be a boy or a man. I was content in my femininity. What I always wanted was to be the equal of any boy."