Christmas: Santa is a Lady by L.J. Holmes 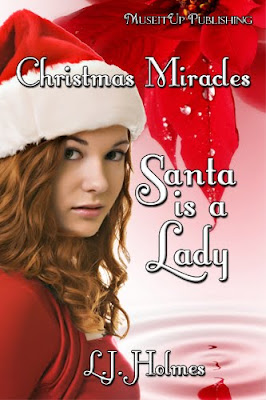 I don't do Christmas, but out of respect for those that do (like the rest of world almost) I decided to a Christmas blog post and thus, read a Christmas book.. and my choice was Santa is a Lady. How could I resist a title like that?

Angie has a disability. She's been badly banged up in a car wreck, has a limp, and is almost blind. She rarely leaves her house but she agrees to be Santa for her friend, Beck. (Beck is a girl) Things go really awry though... Beck turns out to be a mega (I'm thinking 5 letters, first letter B, rhymes with itch..) and Cam, a former Iraq War Veteran brings his daughter into the store and upon discovering Santa is a lady, goes up one side of her and down the other...

Cam has issues of his own and realizes he has lashed out Lady Santa for the wrong reasons. But while Cam and Angie make up and make peace, Angie and Beck have it out and it looks for a while there like Christmas may be ruined before it starts. Can Angie and Beck become friends again? Is something brewing here between Angie and Cam?

I had one issue with this story, making it a four star read. I enjoyed it, it was a feel good, sappy thing, it was short and perfect for the holiday, BUT I was terribly put off the humongous deal made of Santa's beard revealing a woman's face. Um, OK.. the brat/demon spawn/little girl pulled on Santa's beard so why the heck does everyone turn on Santa? I thought everyone was extreme in the overreacting department.. --"You should be ashamed!" he snarled before clomping away. "Get yourself fixed!" Cam heard Beck issue a whispered snarl of her own.--

Though relevant to the story, I was appalled. First of all, tell your brat/demon spawn/child not to pull on people's beards cause though I've never had a beard of my own (thank goodness!) I imagine it hurts. And how is it Santa's fault you got a rude beard pulling child, regardless of the sex under the suit?

That part just didn't make sense to me. I certainly wouldn't date the man who snarled at ME cause HIS kid pulled my beard off my face. LOL However, there is more to it than that.. could have something to do with the kid calling Santa "mama." I mentioned that Cam has issues... but I won't go into that. Read the book for yourself.

Anyways, that's why Santa is a lady this year. :)

I bought this book on Amazon Kindle.
Posted by Tara at 11:41 PM