Murder at the Luther by Kathleen Kaska

This is the second in a historical hotels mystery series following Syndney, a young woman journalist in 1953 as she tours famous hotels and while attempting to write a human interest story, always finds herself involved in a murder.  In this case, she is at the Luther Hotel's (Est. in Palacios, Texas in 1903) New Year's Eve ball when a man she has a bird watching date with falls dead at her feet.  Her finger prints are on the weapon and an overzealous sheriff up for re election arrests her.  After one day in jail, Sydney must find the real murdered in order to clear her own name.. or she is going back to the jail cell. 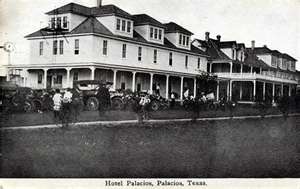 People are trying to kill her as she uncovers a corrupt plan involving a greedy ex wife and an oil company and hired goons.  Sydney's hotel room becomes a hub full of interesting, crazy, lunatic, and drunk people and even a "long lost relative," supposedly... ﻿ And of course, cousin Ruth shows up.  I don't like Ruth and I think the books would be better without her and thus, the four star rating instead of five.  In this installment, especially, I found Ruth's character annoying and most of the time, unnecessary.

Still a good mystery though.  Favorite laugh out loud moment: (When Sydney hitches a ride with a man on a tractor, the following occurs) "I bade him goodbye and jumped down, and as I did my gun went off and shot a hole in his radiator.  I ran back, handed him another five, took off down the street, and didn't look back.  If I survived this day, I'd give serious thought about attending Mass on a regular basis."

I bought this book on Amazon kindle.  For those interested in this series, the first one was Murder at the Arlington.