The Vote by Sybil Downing 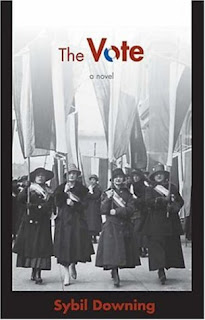 If you haven't figure out what this book is about just from looking at the title... It's about this: 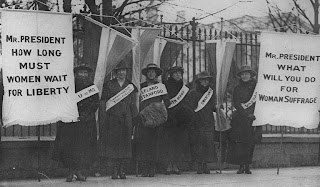 In 1918, there was not only a war going on overseas, but also a war right here in the States, the war for women. Women wanted, deserved, demanded the right to vote. At the head of this war were two women, Alice Paul and Lucy Burns. They headed the NWP (Shame on you, ladies, if you don't know your women's history. National Women's Party for those that don't know.) These women arranged a picket line in front of the white house. Everyday, women stood out there with banners appealing to President Wilson. And they were arrested. They were thrown in Occoquan prison at one point and the heroine of this tale, Kate, a young girl from Colorado goes with them. Her and Lucy Burns are just two of the incarcerated women thrown in with cockroaches and rats and fed bug infested gruel for fourteen days while forced to work sun up till sun down.
Though Kate was simply in the wrong place at the wrong time, she stands up with the women of NWP and decides to join them after their 14 days is up. She defies her mother and father back in Colorado and goes from stuffing envelopes to organizing peaceful protests in parks, which gets her arrested again.

She is sent back to her hometown to convince the Colorado Senator who is also a close family friend to change the upcoming Amendment vote in the women's favor OR the NWP will get him out of office. This causes much friction with Kate's family. Meanwhile, there's a budding romance, but the fellow in Kate's sights may be spying on the NWP... and we can't have that...

BUT this chick does what she has to and hooks up with another chick, head of a union, Mary Daly.  I got to confess, at this point, the book got a bit dull (around page 210 or so) because as Kate runs around and visits the press and politicians, it gets repetitive.  I also seen the movie, Iron Jawed Angels not too long ago so I knew what was going to happen.

I thoroughly enjoyed all the parts involving Lucy Burns and Alice Paul and I never get tired of reading about women's rights so I really liked this book. I had one minor quibble in the beginning. I found myself a bit bothered when the book points out that all people of color are valets or floor scrubbers. I know good jobs were not available to non whites back then, but the race issue not being a part of the book, I failed to see why that was pointed out.  It came off as a bit degrading and I found myself wondering if the heroine was a racist. After the first quarter, however, the issue never came up again.

Four stars and this was a library book.