The Harlot’s Tale is the second book in a historical mystery series that takes place in 17th century England whose protagonist is the midwife Bridget Hodgson.  She is a widow from a noble family who is accustomed to wielding authority, but she is also highly principled.  When I started reading the first book in this series, The Midwife’s Tale, I thought she was arrogant, self-righteous and intolerant.   I almost gave up on the book because I found her too unsympathetic.

Fortunately, I became interested in Martha Hawkins, her new maid.  The very fact that Bridget gave Martha a chance despite her background showed that Bridget had more compassion than I had imagined.  I continued reading because of Martha.  She is clever, courageous and resourceful. She also has some very interesting skills that make her useful for crime investigation in both books. 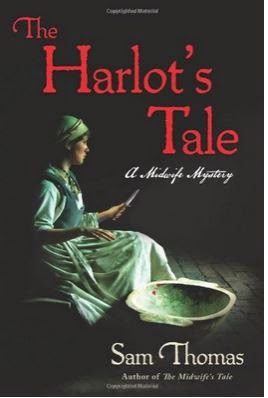 In this second book, I think that Martha has influenced Bridget for the better.  She seems more open to new ideas and approaches.  She has become more supportive toward women in unfortunate circumstances which also puts her on the wrong side of the law. As a midwife, Bridget is supposed to report all women giving birth to children out of wedlock so that they can be publicly whipped.  In Puritan dominated York, the city where this series takes place, Bridget’s newfound sympathy can be dangerous to her.

The case in The Harlot’s Tale involves a series of murders of prostitutes.  The killer leaves Biblical verses in the hands of the victims.  This leads Bridget to suspect that some fanatical Puritan is the perpetrator, but this gives her a great many suspects.  The religious zeitgeist had become increasingly fanatical.  There is a popular Puritan preacher in York who calls for “charitable hatred” toward individuals that Puritans consider immoral.  This phrase is never explained.  How can hatred ever be charitable?  It sounds like war for peace or freedom within slavery.   When I analyze it from a Puritan perspective, I imagine that a Puritan might consider it merciful to kill someone who is sinful so that they will sin no more, and won’t enrage God any further.  From a modern secular viewpoint that kind of thinking seems bizarre.

Although the situation in The Harlot's Tale is scarcely unexpected during this period of England’s history, there are some plot twists that made for a good mystery.  The plot complications and character growth caused me to consider this novel an enjoyable read.