I am Sophie Tucker: A Fictional Memoir by Susan Ecker, Lloyd Ecker 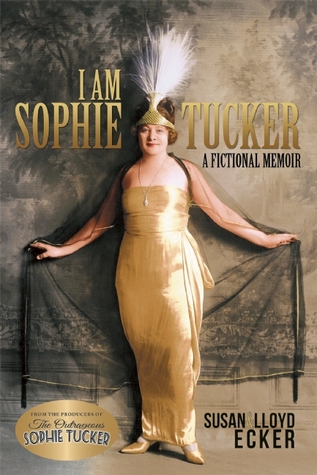 Mama made her way across the bustling road without getting killed by a speeding horse cart, but picked up the phrase "F*ck you!" from a driver who came within inches of running her over. She wrote it down phonetically in Yiddish in a little black notebook she kept in her pocket. She thought it might come in handy someday.

I'd never heard of Sophie Tucker before, but after reading this book, I'll never forget the name or the woman behind it. She was a Vaudeville star with an incredible sense of humor and zest for life. This fictional autobiography takes us from the time she was in the womb and her parents left Russia to come to the States through her first marriage and into the early days of Vaudeville and the Follies.

And everything is told in a humorous manner, with Sohie Tucker wit. The laughs, smiles, and chuckles were endless for me.

Mr. Elliot patiently explained each foreign term, like "marquee." Thankfully that was different than the Marky who sat next to me in grammar school. The only show he could headline was the Breaking Wind Spectacular.

I enjoyed reading about Sophie and her mother. Her mother was something else. I can see where Sophie gets her "balls". I think one of my favorite scenes in the book was when her mother set a ball of soup in front of her boss and had a few interesting choice words for him.

Sophie is fun and amazing too, as she goes from kitchen slave to singing in a house of ill repute to the stage, as she toes the line between "wholesome" and what sells, as she persistently writes funny letters to important people asking for a chance, as she survives stage rivalry and jealous divas, struggles to fit in dresses, and even becomes friends with Al Capone.

There was one thing in the book that had me frowning at Sophie and it turned out I was wrong about the situation all along. In the end Sophie is a true heroine, selfless, loving, and there for those who need her.

I loved every word of this story. The only thing that bothered me at times was how very often Sophie makes fun of her weight. She acts like she's an elephant. And looking at pictures of her back then, in her early Vaudeville days, I don't see such a large woman. I guess women were smaller then.

This was a fun read and I realize some of it is probably fictional or exaggerated but the authors did a fabulous job in the telling of it. I appreciate this story and the heroines at its heart--Sophie and her mother, two very strong Jewish women. Oh--it even has a murder mystery in a brief bit. A hotel, a dead Russian, and a wedding band. That's all I'm saying.