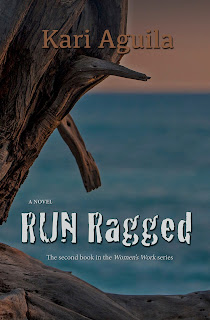 Welcome. You’re here to promote the September Kickstarter campaign for RUN Ragged, a dystopic feminist novel. Tell me, please, what was the inspiration behind this story (or series)? How did it come to you?

Kickstarter is a crowdfunding site that lets real people support projects they find interesting. It puts you in charge of what gets created, and gives you great prizes for helping out! RUN Ragged is featured on www.kickstarter.com in September. Check it out!

I'd always heard people say, "Wouldn't things be different if women ruled the world?" and it got me thinking about modern feminism, the polarizing portrayals of gender issues in the media, and the very concept of equality. As humans, do we just need somebody to boss around? Do we create labels and hierarchies to guarantee that one group is always the “other” group? My first novel, Women's Work, was the award-winning story of people pushed to their limits in a matriarchal society gone wrong. It was voted one of the Best Books of 2014 by IndieReader, and has garnered critical acclaim from reviewers. Since the release of Women's Work, I've had the honor of meeting with readers and Book Clubs across the country, and have loved the heated discussion and emotional debate that it inspired. One idea that echoed through all those conversations was the need for a sequel -- readers were dying to know more!

Run Ragged is that second story, and I am thrilled to present this suspenseful and thought-provoking novel as a Kickstarter campaign. You can support RUN Ragged here. This is going to be one of those stories that will stick with you long after the last page.

We focus a lot on heroines here on Book Babe. Tell me what makes your heroine(s) strong.

Rhia was a minor character in Women's Work, and so many readers wanted to know more about her. She’s an independent and intelligent sea captain who knows how to utilize the broken world around her to survive. This new stand-alone story finds her working for the government, struggling to keep her head down while she does her job. She can see the inherent problems in the system, and worries that it doesn't matter if a man or a woman is in charge; power corrupts everyone, male or female. Through a terrifying twist of fate, Rhia becomes the reluctant hero who refuses to back down in the face of evil. Run Ragged will leave you questioning the very idea of equality and show you a deranged world of misinformation and torture in the not-too-distant future.

Do you see any of yourself in her?
I sometimes wish I were as independent as Rhia. In RUN Ragged, she lives alone on her boat, travels between neighborhoods to barter goods, but manages to be a loyal friend and a good person. I think there was a time in my early 20’s that I could have become Rhia, when I felt a bit rudderless and adrift in the world. Maybe we all go through a time when we’ve been hurt and feel the need to pull away from society, and that’s what is so romantic about her life before everything goes wrong.

I also hope to have as much courage as Rhia. She’s exquisitely human, in that you see how much she wishes she could just hide from the troubles of the world around her and live a peaceful life, but when thrust into the heart of evil, she manages to rise up and meet the challenge. She is an ordinary person in an extraordinary situation, and she finds hidden reserves of strength she didn’t know she had.

It was very difficult for me to write the scenes where people in charge of others use their power in terrible ways. There is some sexual manipulation and psychological torture, and there were a few times I felt like I needed to walk away from my laptop after I’d finished a scene. None of it is gratuitous, but you certainly get the idea of how twisted these people are. I worry that people who know me will read those bits and say, “Ew. That came out of Kari’s brain. She must be sick.”

I did a lot of research about boats and sailing to write the first chapters of RUN Ragged. I wanted to figure out how to rig a boat together using spare parts and really give the reader the feel of being on a boat. One of my best friends is a captain in Florida, and she was kind enough to help me with ideas and nautical terminology. For example: it’s a rope when it’s on land, but it’s a line when it’s on the boat. I also spent a lot of time at Fisherman’s Terminal in Seattle, just watching different vessels and breathing in the rhythm and feel of the docks.
There is quite a bit of information about foraging and medicinal plants in RUN Ragged, as well. I read a few books and took a great day class on foraging near Seattle. It was eye opening to learn how many native plants can be used for food, medicine, or both. I’ll never pull a dandelion again, unless I eat part of it!

As with Women’s Work, RUN Ragged is a gripping, thought-provoking story about a society that has swung the pendulum of gender politics too far in one direction. In addition to being a suspenseful page-turner, it sheds light on the injustice of our current system by reversing roles and switching assumptions about the labels we put on people. RUN Ragged will break your heart at the same time it restores your faith in the human spirit. It’s such a timely and fascinating story readers will want to have discussions about its themes and characters. I love talking to Book Clubs, and can Skype with people around the world, so I hope to hear from people about what they think.

Your book takes place in the Pacific Northwest Coast. If I were a tourist, what would you recommend I see there?

RUN Ragged takes place in the not-too-distant-future along the Pacific Northwest coast. It doesn’t refer to specific real locations often, but to get a great sense of the story, you only have to look at photos of the Olympic Peninsula in Washington. The coast is rugged and remote, with towering sea stacks, rocky shores, and miles of uninhabited old growth evergreen forests inland. Standing on shore in a fine morning mist, it doesn’t take much to imagine being in an eerie, post-apocalyptic world devoid of people.

Oh, no. I’ve watched Doctor Who too many times to fall for this one. You start time travelling and all of a sudden it’s freaky robot aliens and life and death decisions around every turn. No, thank you.
Besides, I am blissfully happy right where I am. I could think about decisions I’ve made in the past or how I could help myself in the future, but I just want to be present. I want to live right here and right now and actually see, hear, feel, taste, smell the world around me. I only get one shot at this life, and if I’m consumed with regrets or wishing I could change things, I won’t be able to make the best decision right now. Plus, to think that I might influence someone in the past or the future is a heavy burden I’m not sure I want to take on. Wimpy? Maybe.

There are so many books out there nowadays... What makes your book stand out from them?

RUN Ragged is a high-quality, professionally edited and developed book that has a strong indie feel. It will probably never sell a million copies, but I didn’t write it for the masses of unthinking readers who just want to read what everyone else is reading. This is one of those underground books that gets passed around by word of mouth and has a low hum of urgency and danger about it. It’s a book you will tell your friends about. 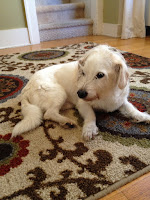 When you marry a veterinarian, you sometimes have more pets than people in the house… In the Aguila family, we stick to the basics: dogs, cats, fish, and a rotten little hamster once. If I’d answered this last month, I would have said we currently have 3 cats and 2 dogs, but we recently had to put down our 2 oldest cats. They were 18 and 17 and had cancer. It was time. 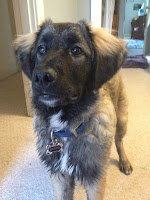 Our old white geezer dog is Thomas Jay O’Connor Hetcher Aguila (the more names a dog has the more love he gives). He’s 16, can’t see, can’t hear, hardly walks, and sometimes poops in the house because he doesn’t know it’s happening anymore. He smells terrible and is very grumpy. But when I still down next to him and pet his head, he still does the happy groaning sound and closes his eyes in pure bliss. So, he’s still my pup. 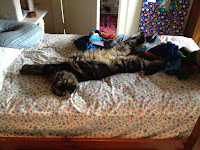 The new kid on the block is Blinky. We haven’t given him nearly enough names yet, though he’s The Blink, Blinkster, and The Blinkinator. He’s 10 months and we got him as a tiny puppy from the pound. Holy cow, what a good dog! He’s big and gentle, playful and friendly. He loves when we throw the ball in the backyard and take him for walks or car rides. He adores Thomas and wants to play with him all the time. Thomas hates him.

Phinney (Michael Finnigan Fuzzball Phinney Ridge Phinney Avenue Hetcher Aguila) is our two-year-old cat. He’s bigger than some of my human kids. I’d like to say that’s all fur, but no. It’s really him. He’s pretty mellow, and could take us or leave us, but we love him to bits.

In closing, please visit www.kickstarter.com and search for RUN Ragged in the Search Projects line! It’s an amazing story, and this is an amazing way to play a part in its creation. Thank you!