Marlene Dietrich wasn't an icon for me until I saw her in Destry Rides Again, and then I wanted to see all her movies.  I knew that she first had success in Weimar Germany. My concept of Weimar Germany is based on Berlin Stories, a short story collection by Christopher Isherwood which is best known for its musical adaptation, Cabaret.  I imagined Marlene Dietrich within that environment which was so unconventional and so free.  This was the Marlene Dietrich that I expected to see in Marlene by C. W. Gortner, and he met my expectations in spades.  I received my copy of Marlene from Edelweiss in return for this honest review. 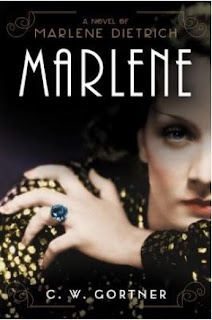 As I read C.W. Gortner's vision of Marlene Dietrich, I felt that she represented Weimar Germany's zeitgeist ( a German word that means the spirit of the time), and she never really became part of Hollywood.  Hollywood studios tried to dictate what sort of life she led, but she carved out an existence for herself that was independent of Hollywood expectations.  She always looked for ways to get around rules in order to do as she pleased.

I feel that Marlene was also emblematic of an important meme of this blog, Strong is Sexy.  Marlene was all about Strong is Sexy.  She made dressing like a man sexy by being both bold and elegant.  She flaunted her male attire in Paris where transvestism was illegal.  She flouted that law and seemed to be daring the police to arrest her.  She is even better known for her principled refusal of the Nazis when they asked her to perform in Germany.

Gortner revealed aspects of Marlene's life that I'd never heard about in detail. For example, I knew that she entertained U.S. troops during WWII, but I never knew that she risked her life on her second USO tour, or that General Patton taught her how to shoot.

Readers who are uncomfortable with a protagonist who has a great deal of sex with both genders should not read this book.   Neither should readers who are upset by adultery.   Marlene was bisexual, and had unconventional views about relationships.

I found this novel very entertaining and I would definitely read another book by C.W. Gortner.