The Muse by Jesse Burton--The Uncovering of a Lost Artist

I hadn't read The Miniaturist by Jesse Burton because  a couple of my Goodreads friends had negative comments in their reviews that made it sound like a book that I wouldn't enjoy.  Yet I will give an author more of a chance when the novel sounds like it will be of special interest to me.  I received a free print format ARC of Burton's second novel, The Muse, from the publisher in return for this honest review.   The ARC's cover is very different, but I have to say that the official release cover below is beautifully designed and more intriguing. 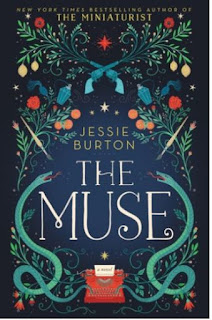 The Muse is a dual period historical fiction novel dealing with artists and art galleries, but I was particularly drawn to it by the fact that the 1960's POV character, Odelle Bastien, was an Afro-Caribbean woman who worked in a London art gallery.   I thought this was an unusual choice, and that Jessie Burton should be applauded for her inclusiveness. I was also interested in the fact that the other period was Spain in the 1930's, and that it dealt with a family of Jews who had fled German occupied Austria.  The 1930's POV character is 19 year old Olive Schloss, a young painter with great potential, who very unfortunately has an art dealer father that doesn't take women seriously.

Olive's story resonated tremendously for me.  The family circumstances were familiar.   I remembered reading and reviewing a novel about the real 19th century Viennese Jewish feminist Bertha Pappenheim some time ago on this blog.  The book was Guises of Desire by Hilda Reilly.  You can find the review here.  The extremely constrictive Victorian attitudes toward women had a much more destructive impact on Bertha Pappenheim.   Yet Olive's father's refusal to recognize that his daughter had a gift might have crushed her spirit if a very supportive influence hadn't entered her life, a half-Romany Spanish woman by the name of Teresa Robles.  Since Olive didn't believe in her work, Teresa makes a fateful decision that changes the lives of everyone in the Schloss family as well as the life of her half-brother, Isaac Robles.

Odelle Bastien in the sixties has a parallel relationship.   She has no confidence in her ability as a writer until she meets Quick, the mystery woman who hires Odelle as a typist at the gallery.   Quick supports and encourages Odelle as a writer just as Teresa supported and encouraged Olive as an artist.   So I feel that The Muse is very centrally concerned with why women don't pursue their dreams, and how they can overcome their barriers to success with the help of other women.  This makes it a very feminist narrative.

I have to say that I had a problem with the resolution of the 1930's Spain storyline.   I thought I knew how it all ended and I turned out to be wrong.  I realized how emotionally invested I'd become in my theory about what happened to these characters when I became upset about the final twist in the plot.  This means that the author did her job very well.  I wouldn't have been so broken up if Jesse Burton hadn't made me care about these fictional creations caught up in the savagery of the Spanish Civil War.

Other reviews have compared this book to The Last Painting of Sara de Vos which I recently reviewed on this blog here.   They do have a number of commonalities. Both books have dual plot threads taking place in different periods, focus on the causes for the lack of recognition for woman artists and on the tremendous gulf between the rich and poor.  Both books also led me to reflect on whether the entire truth about anyone can ever be known, or only the truth as filtered through one perspective or another.   On the other hand, The Last Painting of Sara de Vos left me feeling that a kind of justice had been achieved, but The Muse just made me feel sad.   Another reader who identified more with Odelle than I did might have felt uplifted.

I have to conclude that any book, like The Muse, that has the power to move people and cause them to think, is definitely worth reading.